As we were both not driving, yesterday I met up with my taxi buddy, Alan Tang (Gintai) somewhere in Bugis area for some drinks and a chat, from about 5.30pm to 9pm.

We catch-up over four big bottles of Carlsberg and had a simple dinner together. Since I live in the wild wild West and he's from the carefree laid-back East, we decided to meet half-way in town, Bugis.

Alan had to buy me drinks cuz he lost to me in the recent World Cup soccer bet. Amazingly, our bets were sealed before the start of the World Cup tournament and both of us were spot-on in picking the finalists. I followed Andy’s father by betting on Germany whilst Alan on Argentina.

Even though I’ve known Alan for about 3 years, we only met on few occasions. Yesterday was the 4th time we met over the 3-year period. We got to know each other thru blogging and keep in touch over the internet via Facebook or email. We follow each other’s blog and sometimes we exchange comments on our own respective blogs.

Each time we met, we got to know each other better. Maybe with more drinks, I became more open and loosen up. I started to relate some of my personal past stories, like how I had to struggle in the beginning when I started driving taxi due to my lack of familiarity of local roads. Though I live in Singapore all my life, yet I'm still not so familiar with all our roads when I started driving taxi. I just can’t imagine those new citizens driving taxi on our public roads not facing any problem at all.

Anyway, I also related how I ever worked in Saudi Arabia’s 2nd largest city, Dammam in the late1990s after my retrenchment before taking up taxi driving. At 48, I left my family with young children to work there. Even though the pay was about 4 to 5 times of an average worker here, I dearly missed my family and the lifestyle here. Everything was paid for by the largest petrochemical engineering and construction company in S.Arabia, where I was employed as a procurement supervisor. I was given free lodging, company car and even a local cook was deployed there for us. I was part of a group of locals (FT) working for the MNC in Saudi Arabia.

After our story ( Cabby Bloggers ) was published in The New Paper, one in the group of Singaporeans working then with me in Saudi Arabia contacted me on my blog. Soon, I will have a gathering of all my ex-colleagues, all of whom I have lost contact for almost 20 years, to reminisce those good old days spent working in a foreign land.

I was in jovial mood cuz I just came back from a short holiday trip in Bangkok. All of a sudden, I remarked that one of us should blog about our recent story in The New Paper. Alan was not keen and mentioned I could blog about it if I wanted to. I told Alan that I was in fact waiting for him to blog about it. He replied that there is nothing to blog about.

“Come on, we need to capture that memorable moment in our blogs just to keep a record lah!” I appealed to him.

I then flipped out a 50 cents coin and suggested that we toss the coin to decide who is doing the blogging. Again, he lost in the flip of the coin. He seems like a hopeless born loser with no luck and I'm a lucky gambler.

Alan pondered on how to go about blogging on that story where we appeared together in The New Paper story published on 13th July 2014 – about 10 days ago? I suggested he could blog at whatever angle or style he fancy so long as he blogs about it and I, with his permission will reproduce it in my blog.

Well, actually Alan was ever approached by few reporters for interview before The New Paper initiative. He did not bother to accede to their requests. He was also invited by think tanks and other organizations via email to participate but he ignored them totally.

If not for me, Alan would not have agreed to that New Paper interview. I was approached by the lady reporter from The New Paper and recommended that Alan should also be interviewed together with me. Alan reluctantly agreed to my idea as he didn’t want to disappoint me. What a friend, Alan! I thank you from the bottom of my heart. I would have also declined the interview if Alan had not accepted my request to come along with me.

Finally, we met somewhere in Bugis area and Arab street near to the Sultan Gate for the interview and photo shoot. We spent about two and half hours over the session. The reporter was a nice little lady pursuing a degree in a local university. The Malay photographer was also very professional and friendly taking so many shots of us in different locations with many poses. The interview was conducted in the middle of June but only got published on 13th July 2014.

Of course, I was delighted when the story got published and especially with a photo of us together – that’s the main satisfaction. As taxi drivers and bloggers, we have got lots of things in common to share. We admire each other’s strengths and limitations as fellow bloggers. In a way, we synergise each other in our different life perspectives as we observe and comment on things happening around us.

In a way, I compelled Alan to blog about The New Paper write-up on us. Maybe, I felt that the photograph of us appearing together in The New Paper cemented our friendship that blossomed in the cyber world. It had to be archived here for eternity.

Thank you, Alan Tang for being a friend. It’s my honor and privilege to have you as a friend. May The Force Be With You! 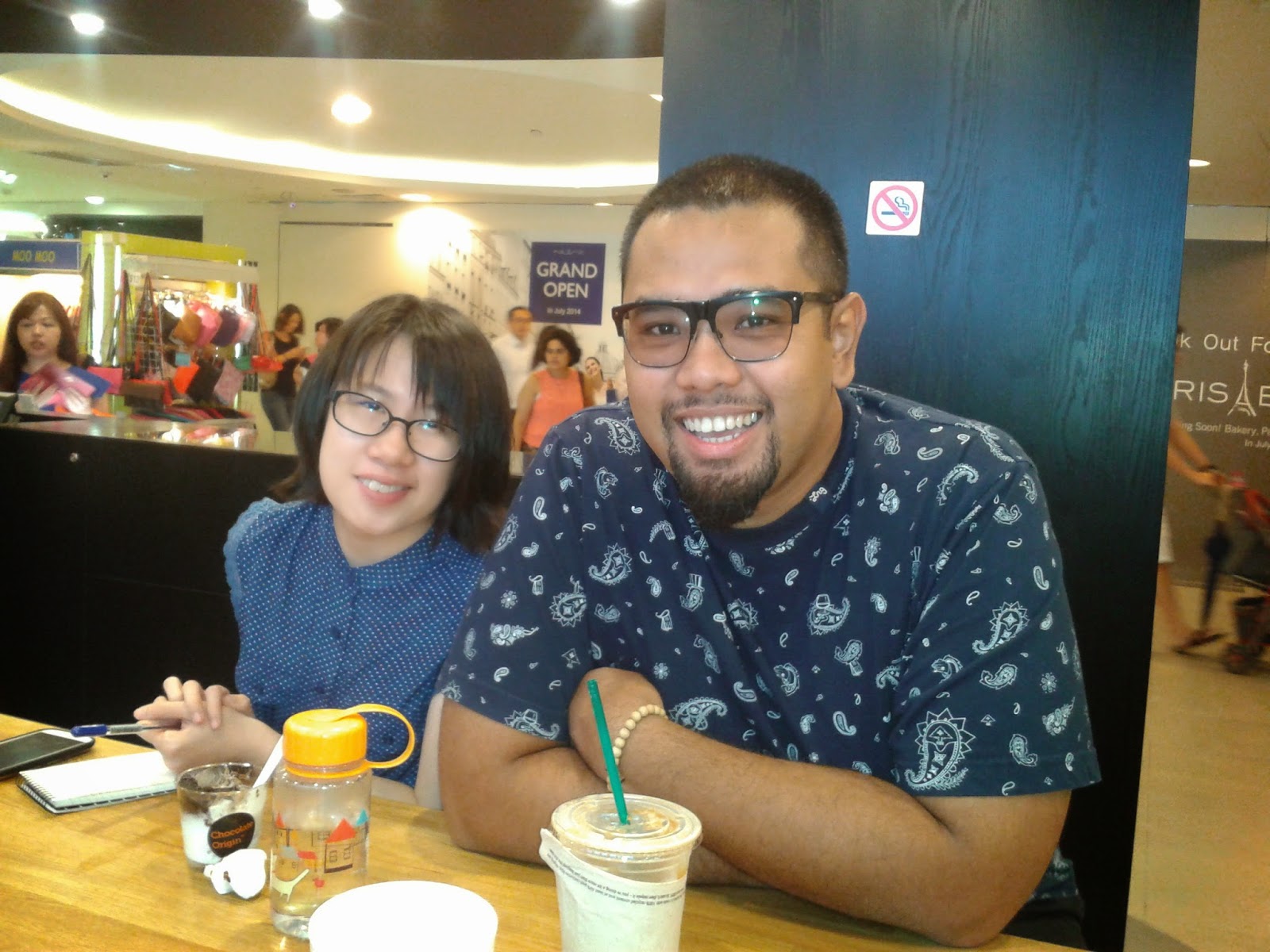 The New Paper Reporter and Photographer.
Posted by Diary of a Singaorean Cabby at 2:33 am

I've been following your blog since the past few months. They have been an interesting and informative read.

I would like to ask your opinion on a mobile phone software which I have developed for the taxi community. There's a crowdfund project set up for the application to make it work better. Hope you can take a few minutes to visit this link and leave some comments.

Many thanks for your help in advance!

I read your "link" a few times and if I'm not wrong, your app. seems to only tell TD the numbers and presence of passengers at taxi stands.

I'm sure you're aware that presently there are a few efficient private app. that allows passengers to book a cab apart from other useful features for users. A quick recall, taxi booking mobile app like GrabTaxi and EasyTaxi are already in S'pore and they're doing pretty well. I think the market is already saturated and highly competitive. Any new entrants with the same features like these two established guys would not survival or very profitable. I might be wrong! Good Luck. Regards James

Thanks for responding to my comment! You're right that new entrants who offer the same features as Easy Taxi or Grab Taxi would not survive or be very profitable. I have the same thoughts.

I think I'll have to brush up on the way I present the information on the crowdfund website. The software I developed is not for taxi booking, so it does not compete with Easy Taxi or Grab Taxi.

The app is meant for the part of market where passengers do not book taxis. I doubt Easy Taxi or existing taxi apps target this market. But if you happen to know any that does, please share with me.

Well done! It mirrors perfectly what I blogged! I didn't know blogs could be written in such a way. Cheers!

Thank you so much for sharing this with us! Really helpful for me.airport taxi transfer

Nice post!!!I would like to thank you for sharing your thoughts and time into the stuff you post!!