Gathering of Ex-Colleaques After 20 Years. 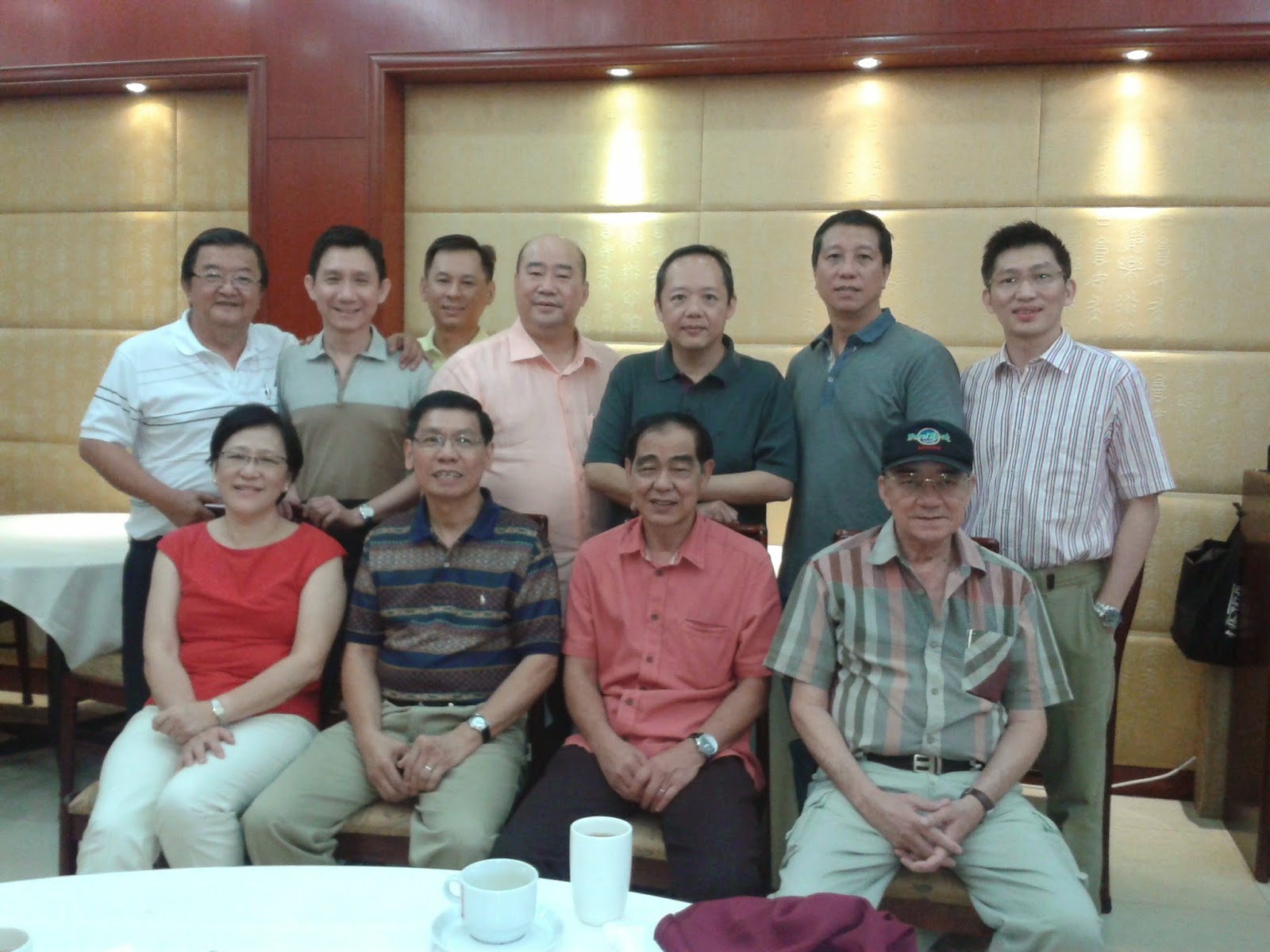 "James, long time no see, I thought you.......", Kevin Lok remarked facetiously as I sat down beside him in Teochew Huat Kee Restaurant at 74 Amoy Street, around noon yesterday. His funny bones and warm smiles had not left him inspite of the passing years.

Yes, indeed it has been a long time. The last time I saw Kevin Lok was 20 longs years ago when we were colleagues working in MMG Dammam, Saudi Arabia. He’s a joker and a born organizer and in fact, he and Ronald Gan were the ones who gathered our 8 ex-colleagues together that afternoon to have a reunion lunch on Hari Raya Puasa holiday.

To my surprise, Kevin Lok, Ronald Gan, Kong Chee, Robin Lim, Andrew Chan (VP) and BT Kwek had arrived earlier than me and were already seated at a round table towards the end of the restaurant. Two faces were new to me. Andrew Chan (my ex-boss) quickly introduced them to me as Mr. Francis Lee (Owner of Teochew Huat Kee Restaurant) and Mr. Edmund. Both worked in Dammam before me. 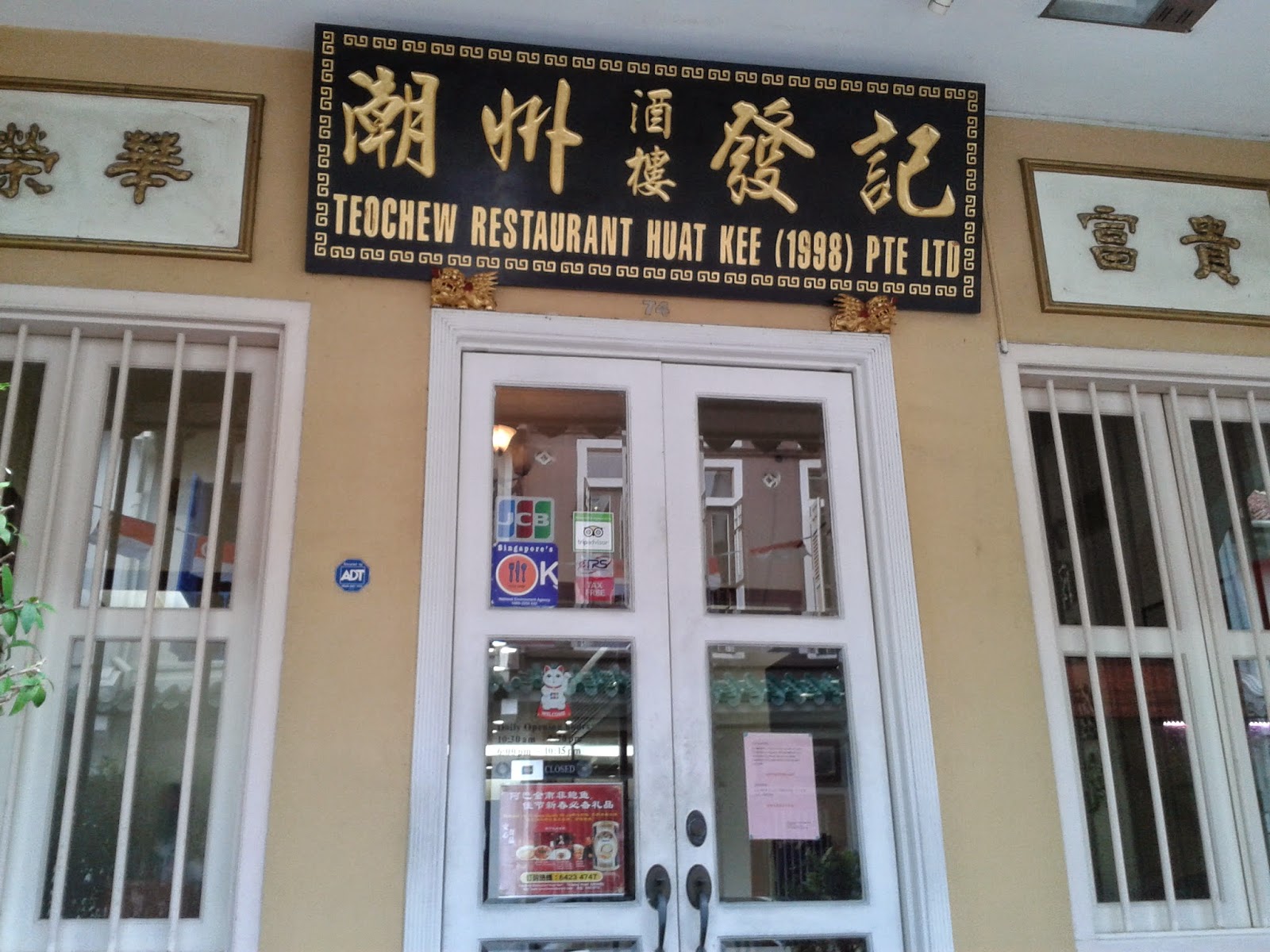 I began to wonder. How did Ronald and Kevin managed to maintain a contact list of all my beloved ex-colleagues after all these years?. Cell phones were uncommon then. The most each has was a house line,
office number or pager. But Ronald and Kevin have them all!. I salute them and is grateful for their marvelous initiative in organizing the gathering.

Well, Kevin never have my cell phone number but he intelligently notified me of the reunion lunch in one of my post, after Desmond Gan saw me in a recent The New Paper article. That was how I got invited....through my blog.

Unfortunately, not every one of my ex-colleague were present. Mr. Robert Phua, at 60+ is wheelchair bounded with a medical condition. Mr. Charles Teo, my roommate had flown off the radar, (disappeared like MH370), Desmond Gan (Ronald Gan's brother) was busy and so were Peter Lim and Koh Kok Chwee.

I was 48 when I worked in Damamm. Back then, all my ex-colleagues were young bachelors in their late twenties. They nicknamed me SC (Senior Citizen) as I was the oldest and a married person. Even my boss, Mr. Andrew Chan was two years younger than me at 46.

Seeing the subtle facial changes in each of us after 20 years was overwhelming like looking at our childhood photographs. Undoubtedly, all of us have naturally grown much older and heavier.

Today, my ex-colleagues are in middle-age, while I'm an old man. Ronald dyed his white hair and Robin Lim has receding hairline. BT Kwek, Kevin Lok and Kong Chee have lost their smooth and youthful skin. Only our voices never changed. If the lights in the restaurant were switch-off to create total darkness, we would know who were talking, like we were chatting while having our meal in our common dining hall in Dammam 20 years ago. Each voice has an unmistakable personality and we know whom it belongs to till today.

About half an hours later, Andrew Chan commanded our attention by welcoming us all to the gathering and thanked the organizers sincerely. Perhaps we had all forgotten our hunger in the excitement of catching up old time with one another. 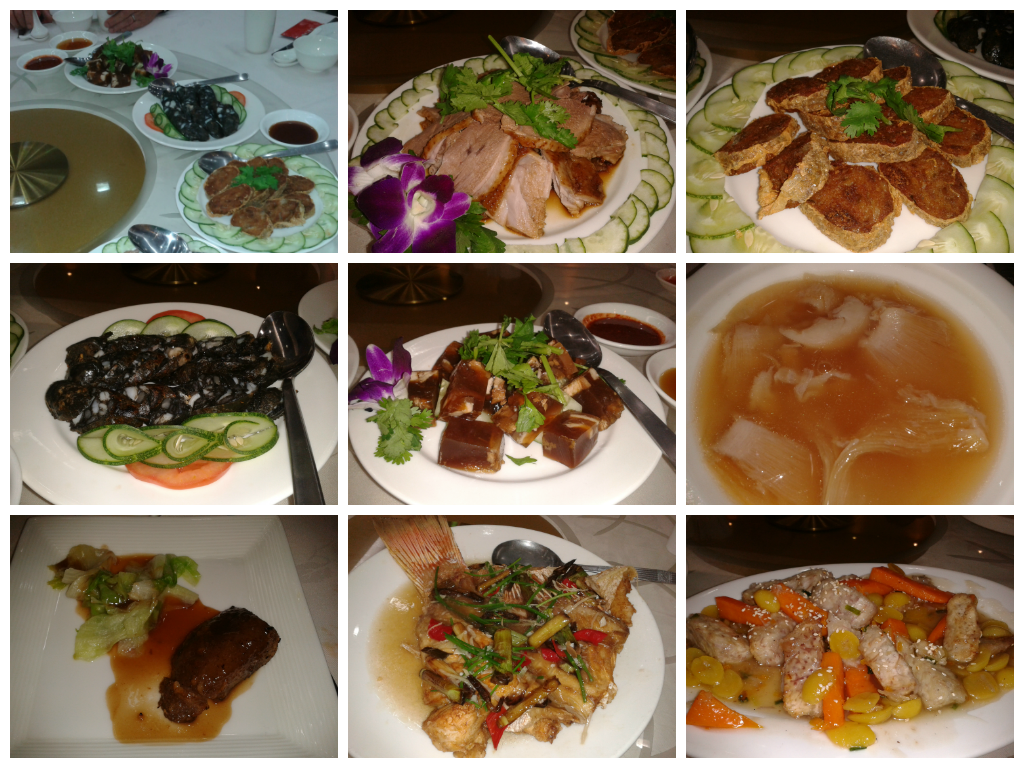 Over a selection of exquisite and delicious Teochew cuisine, specially prepared by Mr. Francis Lee, together with Chinese tea and beer, we chatted and rebuild bridges disconnected by time. And we also merrily reminisced those good old days spent working in a foreign land. I was busily snapping away pictures so those precious moments were not lost among the dust of passing time.

I'm never comfortable speaking to an audience, even when the audiences were friends, but that afternoon, after walloping couple of beer, I courageously suggested that everyone briefly share what happened after Dammam 20 years ago and also an unforgettable experience while working there. In this way, we update our profile instantly for the group and heaven forbids, NOT for purposes of comparing our fortunes. I thought of asking them to "ke-chiew" (raise hand) in agreement but I knew none would do that. Singaporean are generally shy and conservative in a gathering. So, I started as the first speaker since I initiated the idea.

I briefly related that after Damman, I tagged along with a friend, who was the boss of a public listed company here, in whatever he threw at me. With his help, I made a small fortune. A few years later, I ventured into sanitary steel pipe and fitting business in Philippine with a Singaporean friend. Sadly, I lost my investment completely within 5 years. Thereafter, I became a taxi driver at late 50 till today.

My most unforgettable experience in Damman was eating luncheon and pork meat in cans disguised as vegetable salad through the Saudi custom. The stickers of the pork meat cans were replaced with new stickers that stated vegetables salad were inside the cans. Each meal of forbidden pork was incredibly delicious and an unforgettable experience. Like the saying goes, "Forbidden fruits always tastes better".

Next to speak was Kong Chee. He's now with MOE after a few years lecturing and doing consulting work in the educational circuit .

Robin Lim has the most interesting and dramatic career change after Dammam. Trained in the accounting and financial discipline, he switched to work a few years in senior positions with SCDF, fighting fire and then switched to providing security services with two of the biggest security firms in Singapore till today.

Ronald Gan now runs his own million dollar business providing sales and services in the aerospace industry. He's a born salesperson and has found the love of his passion in sales.

BT Kwek never change his career path. After leaving the procurement department in Dammam, he continued his purchasing career with the biggest American engineering and construction company in Singapore.

Andrew Chan (VP) left Dammam recently and is now retired. But with his extensive knowledge, experience and "guanxi" in the corporate world, stretching from Middle East to China, this wonderful and energetic man of 64 is not going to waste his time playing golf or watching TV. I think he has many plans up his sleeves.

The hero of the afternoon no doubt belong to Mr. Francis Lee, the owner of Huat Kee Restaurant. Tall, balded, and corpulent, he looks every inch a successful business man and an executive chef. Twenty plus years ago, Francis Tan went to work in Dammam as a cook. After his return to Singapore, he ventureed into food business and later set up Huat Kee Restaurant at 74 Amoy St. Today, apart from his restaurant business, he is also a leading OEM producer and supplier of package Shark Fin, Abalone and other exquisite ready-to-eat products. He's now a multi-millionaire and an inspiration to many. The afternoon lunch was on him. 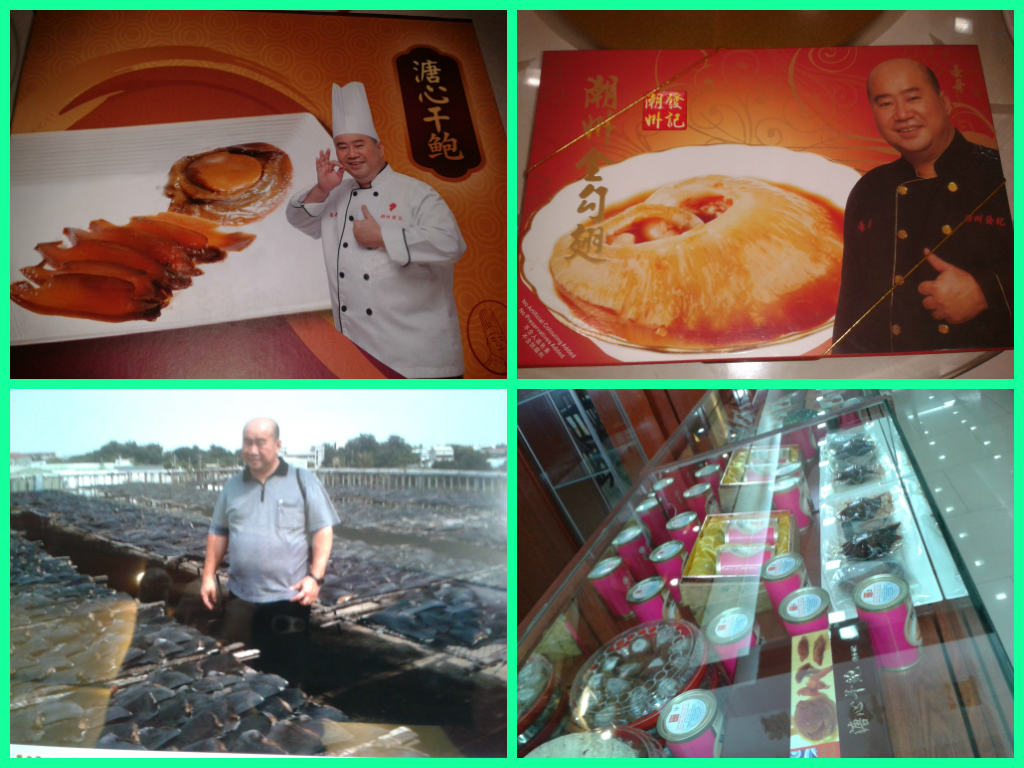 4 hours after the pleasurable gathering started, we had to say goodbye to each other.

Someone suggested that we should dine once or twice a year and perhaps with our families as well. When we meet again (Inshala..God Willing in Arabic), Mr. Francis Lee shall be our guest.

In our entire life, we made many friends. They come and go for various reasons. Life goes on. I hope the seeds of our comradeship planted in Dammam will burgeon into enduring friendship with more socializing and get together. And the beauty thereof shall not wither away indifferently.

"Blessed is the man who walked not in the counsel of the evil
nor the way of the sinners
nor sit in the seat of the scornful.
But shall be like a tree planted by the rivers of water, that bring
forth his fruit in his season,
His leaf also shall not wither,
and whatsoever he does shall prosper"

P/S: The man with his wife was an Ex-SIA Station Manager in Dammam.
Posted by Diary of a Singaorean Cabby at 1:18 am

Wow! Very well written article. The Teochew dishes are tempting and mouth watering. Like you told me in our last meeting, you were looking forward to this gathering. Interesting stories each of you and your frens had after that overseas stint. Life goes on. Frens come and go but some will remain and bond strengthen. To have life long frens is priceless. Cheers to Auld Lang Syne!
http://en.m.wikipedia.org/wiki/Auld_Lang_Syne

I'm currently looking at the Singaporean Taxi market as part of a project and was wondering whether you would be happy and have some time for a quick phone call.

Really enjoy your blog and would greatly appreciate your insight!

Just curious, is the cab that you drove in the past the yellow top cab?

This is my first time that I am visiting here and I’m truly pleasurable to see everything at one place.

hi Mr.Andrew how are you sir , last time i visited Dammam in 2004 when my father passed away
Mr.Anees Abbasi . I,m faisal abbasi. hope you are fine and happy .. my email id is faisalabbasi@hotmail.com