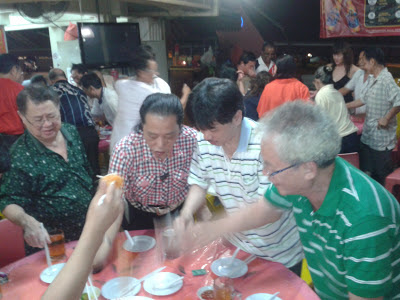 On a rainy night, three days ago, a group of about thirty elderly men and women converged simultaneously at a coffee shop in Jurong Central. It was close to mid-night and the sudden commotion abruptly pierced the silence in the otherwise empty coffee shop that was our regular hang-out.

"These are taxi uncles having their yearly "Lo-Hei", the boss answered.

For the uninitiated, "Lo-Hei" is a Chinese New Year traditional dinner celebration with salad. It stems from a Cantonese's phrase meaning ‘tossing up good fortune’ using Yu Sheng or Fish Salad that symbolises ‘an abundance of wealth and long life’. The word "hei" or ‘rise’ is in reference to a thriving business and thus, its popularity with businessmen during the Chinese New Year. Consisting of white and green radish, carrots, capsicum, turnips, red pickled ginger and such, this dish is usually served as an appetiser where families and friends gather to toss the ingredients while saying auspicious well wishes out loud to bring in good luck. It is also believed that the higher you toss, the greater your fortunes will be.

Now, like a wink of an eye, Chinese Lunar New Year was upon us again. Last year, we had "pot- luck" for our "Lo-Hei" (Link). But this year, the organizer (Mr. Roy - an Hindu Indian) suggested a proper seafood dinner and all agreed. It amazed me that an unlikely Hindu Indian was the driving force and organizer behind our Chinese "Lo-Hei" celebration and this ironic fact alone, truly reflects the deep acculturation of diverse cultural and religious practices in our small city-state.

Each driver paid $50 and invited guests paid half. Some drivers brought their wives and friends. We had steamed sea-bass, craps, vegetable, hor-fun, fried rice and the must-have "yu-shen" from the coffee shop "zhe char" restaurant. There were lots of beers and soft drinks. Some contributed a bottle of gin and "Martell". The "zhe char" seafood was "ordinary", nothing to scream about but the fresh steamed sea prawns (not reared) specially bought and cooked by Mr. Roy was super delicious.

To those drivers who had hand-over their taxis to the next-shift drivers, there was nothing to stop them from getting drunk but none was drunk that night. Most drivers had soft drinks instead of beer, because they knew that if they were caught for drink-driving, their rice bowl would be shattered instantly and probably had to change trade to become security guards or cleaners.

Amplified songs from CD, loud shouts of "yam-shing" and "huat".... "huat" created a ruckus through the night. Everyone thoroughly enjoyed the celebration.

I was overwhelmed at the spirit of comradeship and endearing friendship displayed at the simple celebration. We may be poor taxi drivers, each plying our trade individually on the road but we know how and when to get together to celebrate and enjoy ourselves in a cheap, simple and fun way. I believe there are many other groups of taxi drivers in Singapore doing the same thing like us in Jurong Central.

As usual, many taxi stories were exchanged at the tables but most stories were mundane and trivial, involving unreasonable customers, lecherous peters, prostitutes and benevolent strangers. Only one from Mr. Roy was out of the ordinary and I would like to share it with you briefly.

A few nights ago, Roy picked this attractive Chinese lady of twenty-something at Amber Road. Without giving a destination, she offhandedly asked Roy to just drive. Though taken aback, Roy was smart and hit the ECP expressway towards AYE in the direction of Tuas. Driving a paying passenger at expressway was the easiest way to make a few bucks. Apart from the fare meter clicking furiously, Roy also had the pleasure and freedom, for the first time in his driving career, to decide where to go instead of the passenger.

As he turned into KJE nearing Tuas, the fare meter showed $35. Roy instinctively sensed the gospel truth of "there's always a catch" and asked. "Where are we going now".

"You mean you don't care where I go?"

"Just drive"  she repeated and gazed out of the window like she did for the journey thus far.

"OK". Roy pressed hard on his accelerator and went through BKE - SLE - TPE towards Changi airport. The meter displayed $90 near the airport.

"Please" she said suddenly, "take me back to Amber Road".

"Wonderful, now I know where I should go after driving almost a complete round of Singapore" Roy heaved a relief.

As Roy pulled up to the same spot where he picked her, the meter showed $102, with all surcharges included.

She placed three $50 notes on the middle hand rest and left without saying a word.

To Roy, the extra money was a Chinese New Year's "ang pow" (gift) but he was left to wonder for the rest of his life what the hell was going on with that lady.

That was the end of Roy's story. Now, let me tell you the true story of what happened after our "Lo-Hei".

There was a balance of $119 after paying everything for the celebration. That balance money was used to buy six tickets of system 7 of the $10 million TOTO draw. Wow!, as luck would have it, we struck $4,386. Each got about $160. Not only we had a free "makan"( Malay for food) but a small "ang-pow" too!.  Maybe we should get together more often to celebrate and hope to win bigger lottery prices. Huat! Huat!! Huat!!!

Posted by Diary of a Singaorean Cabby at 10:34 am

Hi James,
You are not over-aged, still can register to redeem.
i registered already waiting for the vouchers.
No harm trying.

For old bird like us, should be eligible for $100 voucher. Completed ORNS training cycle - $100 worth of SAFRA vouchers and a year's free* membership. https://ns45.safra.sg/About/NSSAFRABenefits.aspx

See your point on NS45 eligibility - you are still the older bird!