An Old Lady with Dementia & Dignity. 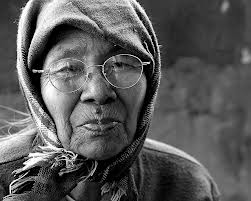 I said it many times before. Friday night is the busiest night for cabbies in Singapore. As usual, I hit the road punctually at 7pm, hoping to make the most money of the week. But my first passenger sent me to Woodland Estate - the "dead" heartland in northern tip of Singapore.

Few people there would take a cab to the city that costs around $35. Most prefer to take the bus or the convenient MRT that costs a quarter of a taxi fare. Anyway, taxi commuters are few in this sprawling estate except for short trips within the enclave from Causeway Point Mall and Woodland Checkpoint.

After my first passenger disembarked, I mulled whether to head towards the city empty. without a fare or to The Kranji Race Course, where horse racing was in progress. Then, with the grace of God, an Indian couple flagged me at a bus-stop near Woodland Crescent. They sent me to Kovan at Upp. Serangoon. I was delighted that I was eventually heading down town with passengers and I was determined to continue my direction towards the city from there. Only in the city I can expect plenty of business.

Now, what happened later is a true story of my encounter with a strange old lady.

In the approaching darkness of night after dusk, I saw a small figure flagging me at a bus stop near Lorong Liew Lian. I instinctively swayed my cab towards my prospective customer. A small, frail, old lady of at least seventy, with a soiled woolen scarf over her head, round rim glass, large handbag and umbrella got in to the back seat. She was dressed in thick dark brown woolen shirt and pant, like a poor peasant in temperate countries at end of autumn.

"Hougang Ave 6., near the shopping mall". she said softly in Teochew dialect.

"Is it near Hougang Mall?" I asked her in the same dialect to be certain that I heard her correctly. There was no answer from her and she sat there blankly like in a daze. I wondered whether her hearing was seriously impaired or she had a bad day and wanted to be left alone.

As I punched my meter and moved off, she suddenly exclaimed, "Make a U-Turn infront".  I was glad that she knew where she was headed,

"Make a U-Turn infront" she repeated like I had not heard her first request.

"Okay, Aunty. Don't worry". I replied as I made the U-turn and headed straight north towards the destination.

"Make a U-Turn" she feebly repeated again, not realizing that I had already made the turn.

I was not surprised at her repetitious requests because I knew that old people tend to have short memory. And I also knew that it could a symptom of dementia, characterized by lost of memory and inability to think well. If she had dementia, then I had a delicate situation and person to deal with. But I was not worried because I had some experience with my present aunt who is suffering from dementia. I reminded myself that I had to empathize her situation and get her home safely.

"Turn Right" she demanded in a clear firm voice, as we hit the junction of Simon Road/Tampines Road and Upp. Serangoon Road a few minutes later.

"Aunty, Right is to Tampines Road, wrong way to Hougang Ave. 6." I calmly explained to her.

She ignored me and shouted excitingly, "Turn Right, turn right" again, like a man shouting at a bus driver to stop at a bus stand.

"Okay, Aunty, I can make a U-turn infront and turn right later. But that's the wrong way. Are your sure you want to go to Hougang Ave.6 or Hougang Ave.1 or somewhere else?" I spoke patiently with a concern look at her.

She remained silent for a second and then shouted again with her right hand gesturing and pointing at me. "Why you said I drank beer. I hate beer. Why you drive me here. Are you trying to cheat me?". Her words and mind were alternating between reality and fantasy. She seems agitated, lost her ability to think well and saw things that were not there.

"Aunty, Don't worry. I won't cheat you. I'll give you a free ride home. Please tell me exactly where you live or show me your I.C." I implored without expecting a coherent reply as I suspected she was seriously confused or worried.

"My husband abandoned me with five young children. Now, my children are abandoning me. I don't have I.C. Stop here now!". She screamed at the end of her sentence. Her voice, words and expression were sad, angry and terrifying. She looked at me with startled eyes like she had met a ghost. She tried to swing her handbag at me but could not lift it and then she started to sob softly.

"Aunty, are you alright?. I asked and she surprisingly gave me a grin in reply.

Is she mad.? Should I drop her at the nearest police post, where the man in blue could help her home? I pondered for a decision.

By then, we had reached Hougang Ave. 6.

"Aunty, we've reached Hougang Ave.6. Is this where you want to stop". I asked her politely as I halted before a bus stop.

She looked out of the window in bewilderment and said "No!. I don't know where I'm. You've driven me to a wrong place".

"Aunty, please, please show me your I.C. and I'll send you home safely. Or can you call your family member". I pleaded and tried to drive some sense into her troubled mind and convince her to let me drive her home safely.

Again, she grinned at me. A few seconds later, with her shaking hand, she pulled out a $10 note from her pants and handed it to me to pay the fare.

"Aunty, no need to pay me. It's a free ride for you". I pushed her skinny hand with the note away.

"Don't say I didn't want to pay you. You've wasted a lot of my time". she said nonchalantly and opened the door.

I was not offended and took her remarks facetiously. In fact, I admired her self-respect and dignity for not readily accepting freebies at first opportunity, not like some people who come in Mercedes Benz to compete with the poor for handouts.

I tried to stop her from leaving as I was worried about her safety but she insisted on getting off. She got off gingerly into a crowd of bus commuters, without looking back.

A bus came into view and I had to move off to let the bus into the bay.

I was reluctant to let her wander into the wildness of the dark night but I had no choice.

About three minutes later, I drove back to the same spot where I dropped her but she was no longer in sight. I checked my soul whether I did the right thing or not and felt guilty that I could have done more for her. Maybe I should have tried Hougang Ave 1. Until today, I felt remorseful for not doing that and I prayed that she reached home safely that night.

I have a soft spot for people like her. She might be old with a seemingly diseased mind and poor but not without dignity. I have more respect for people like her than cheapskates, who pinched on pennies but splurged lavishly to impress others. And worst of all, hypocrites and "wayang' performers, who fatten their million dollar pay with taxi tax-payers' money but take none out of their own pocket to help the destitutes.

I would like to quote a passage from Dr. Gai Mingjie's "Diary of a Taxi Driver" that reads as follows:

"I have more respect for them than those who sit high on the social pyramid and have everything: wealth, power, fame or whatever they mean by the term "success", revolve around them.

Behind the glorious skyscrapers and ravishing neon lights, thousands and thousands of people in this city live like this old woman. They have nothing outside but are strong inside. They live at the bottom of society, but are the very foundation of it. Without their strength and endurance, this nation, no matter if it is a first or second world country and no matter how many gold or silver medals it wins in the Olympics and no matter how many hundreds of billions of dollars it has in its reserves, will inevitably collapse." 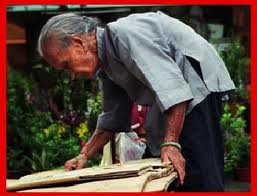 Posted by Diary of a Singaorean Cabby at 6:10 am

Da Gei u hv my respect. U stayed your cool and able to provide a free ride. Well done =)

Thank you for sharing this episode. You write very well, and I can imagine it in my mind's eye. You were extremely kind to her too, though she must have been quite puzzling.
I've shared your blog on mine (click on my name for the url).
Persons with dementia often wander, and one of the themes I read about, although I have not personally experienced it, is they look for homes they used to live in, in the past. Hence they often leave their current home and set out to look for what they remember is their "real home", which may no longer exist.
I am sure the woman you wrote about it back home safely. Please don't worry. Keep blogging, and wishing you safe roads.

May I suggest that the "next time," you make it a point to see that the person is not left alone but wait until she is greeted by someone. Or take her to the police station. You are a very kind and humanistic soul and you did the best you could under the circumstance. Thank you on behalf of the eldery.

i 'm training to be a psychiatrist and im currently working with people suffering from dementia.
this is the first time iv had an insight of someone who looked beyond the dementia into the integrity of a person.
i am inspired.
this will always remind me to look deeper.
thank you for sharing.

Out of sheer curiosity, my mom and I went today to take a look. At the entrance where there are gantries as you see above, you can use your ez-link card to pay a $3 entry fee to the Lower Grandstand, which are the cheap seats but where you can experience the most hype from the punters ? Horse Racing Singapore.

Thank you so much for your kind help. We certainly hope that more Samaritan like you in the service industry understands in dealing with an elderly and come forward to help them. Most of the time, the elderly are ignored or mistreated. Here's more information about understanding dementia: http://ow.ly/q07Vo

The Association was formed in 1990 as a result of growing concern for the needs of people with dementia and their families. ADA is a voluntary welfare organization and is made up of caregivers, professionals and all who are interested in dementia. http://ow.ly/q087f

Da Ge,
I salute you for helping the old folks
Daniel.