Three Things That Make Me Smile on National Day 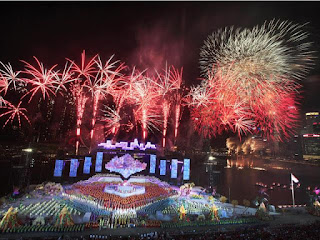 Yesterday, the 9th of August was our country 47th Birthday and a national holiday. As business was expected to be good, I started early, punctually at 6pm. It was still bright and warm.

My first customer was a mixed race couple with about a year old child in the father's arm. The man was a Caucasian and the lady..an Indian, clearly an FT couple. They were dressed casually for the National Day Parade in clear shades of Red and White like the colours of our national flag.

The cute boy had a lion head sticker on his white face but his arms were shockingly......white on the left arm like his father and dark brown on his right arm like his mother!. Did his parents painted his arms or was it natural?. How about the other parts of his body...in two shades too? I was afraid to ask and it makes me smile. Has Singapore become a "rojak" place?.

In the madding crowd of thousands after the parade, everyone was desperate to get into my cab. In the sea of humans, I caught sight of my neighbor's family of three and let them into my cab, while chasing others away. They were jubilant and grateful and I smiled. What are good neighbors for. I give priority to people close to me, not strangers.

On the way back from the airport I had a local Chinese lady in my cab that I would describe as bitchy. I made this judgment after overhearing two of her phone conversations and the "Ah Lian" way she was dressed. From the back she would look like a slim teenage model but from the front, her face is sunken like a worn table cloth, despite heavy make-up. My old auntie looks younger.

"You are the most annoying person in Singapore!" she said loudly and I got really tense but then relaxed slightly when I realized that she was not talking to me but to someone on the phone.

Bitch, bitch, bitch, on she went and I thought 'I can't wait to get this woman out of my cab.'

I helped to unload her luggage at destination and you know what she gave me....surprisingly, a ten dollar tip!. It makes me smile. Appreciation in cash is always welcome.

Posted by Diary of a Singaorean Cabby at 9:23 am

Just like you, I was also working yesterday. Some of us still got to work right? Let others enjoy. Happy National Day!

When others are enjoying, I can make more money! I've no problem with that. Happy National Day!

Yes, a $10 tip is certainly a v. good tip for a taxi driver. In my six years of driving a cab, that was the first time I got such a big tip. Loss coins as tips are common. But I must say that whatever is the amount of tips I received, it's always deeply appreciated.

i hope youre always smile :)