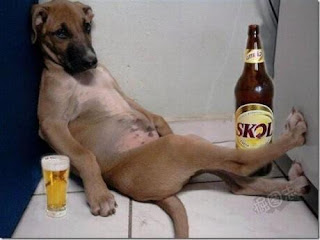 One of the things I dislike about my job is that I had to deal with a lot of drunken. Generally, it does not bother me. Most of the drunken are good people, just out for a good time and sometimes are actually fun to be around. Its those who consume so much alcohol that they threw up inside my cab or creates troubles that had to involve the police that I hate.

Recently, I had to deal with two drunken on two separate occasions with two different scenarios. Luckily, no police assistance was required.

First, I picked up this white man at Orchard Tower. I didn't stopped for him. He opened the front door and got in, while I was stuck in a queue trying to get into the main Orchard Road. It would have been a big hassle to chase him out. He was tall and burly.

"Where to" I asked after he boarded.

"Just go straight" he answered drowsily with a breath irked of alcohol and went to sleep. I could see he was drunk as his head start to bob as he sat there in silence. "I can't move unless you give me a destination", I demanded and stopped at the side of the road. "Tan Tock Seng" he mumbled reluctantly and went back to his slumber.

A few minutes later, we arrived at the main road leading to Tan Tock Seng's Hospital and I announced our arrival loudly into his ears. His head jerked up and he looked at me as if I had just interrupted the best dream he ever had. "Oh ya, Just Go Straight!" and went to his sleep again.

In my heart, I knew it was a "drunken" direction but still I drove slowly straight ahead as demanded. Then, I  thought that maybe some conversation would keep him awake but unfortunately, that failed to keep him coherent and within minutes his head was starting to bob up and down again. "Don't pass out in my cab buddy!" I blasted at him and shook his burly shoulder. He snapped out of his alcohol induced slumber and looked at me with a confused face but went back to sleep again, snoring immediately. A few minutes later, I decided that I had to get rid of him but he must be off loaded at a place with lots of people around. I reversed and drove straight to the main lobby of Tan Tock Seng Hospital. I stopped at the taxi stand with a long queue of people.

"Hey, mister, here is where we stop. Please pay and leave" I said calmly.
Slowly, he awoke and stared at the surrounding with blurring eyes. He opened the door, got out and wanted to walk away without paying my fare. Shocked at his action, I went after him. He was two heads above me, with arms bigger than my thighs.
"Hey, mister, you haven't pay me $8 for the taxi fare". I demanded.
"Justify your fare" he rebuked at my request. I was shocked and speechless at his sudden transformation from a complete drunken to a corporate lawyer in a litigation lawsuit.
"I don't have to do that. Look at the fare meter yourself and pay accordingly", I shot back.
Standing unsteadily, he look his wallet out from his back pocket, his head bent and eyes downcast.
He took out a bundle of notes,in $2, $10, $50, like trying to show off his wealth.

"Here is Ten dollars, keep the chance"
"I don't want the extra. You might need it tomorrow" I stared at him and returned him a $2 note.
The crowd was enjoying the drama unfold. I picked another customer at the taxi stand and drove away. Needless to say, my new customer and I had a lot to chit-chat about the incident. To me, this was nothing new. If you drive a taxi, you would know too.

As for the Second Drunken Incident, I'll pen it in my next posting. I had to get ready for my work soon.


Posted by Diary of a Singaorean Cabby at 5:48 pm

I love the picture that goes with the post. They fit like a rubbish in a bin.