The Lion City of Singapore

For today's posting, I'm going to write about a tourist couple who took my cab during the past week. Tourists are usually the conversationalist type. I normally break the ice by throwing a few comments about anything that comes to my mind. It could be the weather, people walking along the street, the advertising signboards or anything and then the conversation would take off like a breeze. I'm a chatty fellow but would reverse my attitude once I feel the slightest hint that my passengers are the quiet type.

Now, lets get to my plain story of that tourist couple who took my cab last week..

I had this young couple from London boarding my cab at the Changi Airport just after midnight. They had a long 15 hours flight from London, but were surprisingly fresh and chatty. This late twenty something couple were on their honeymoon to the Far East and Singapore was their stop over before their next stop at Bali and Sydney. As it was their first visit to Singapore, they wanted to make the best of those precious 6 hours stop over time to explore a bit of Singapore. With tongue in cheek, I proposed to make their impromptu visit here unforgettable. My charge was $100 for next 5 hours of night excursion with a return to the airport. They accepted my proposal after some discussion. I won't bore you with details of our chit-chat but instead, I'll tell you where I brought them in the wee hours of the night: 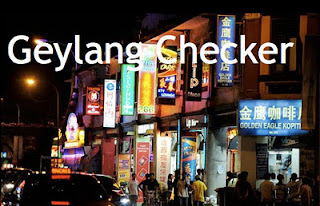 The vibrant streets of Geylang, a popular red light district in Singapore for both local and foreigner workers. Seated in the comfort of my cab, we cruised through the various "lorongs" (side lanes) in Geylang for the young couple to have a look at the "dark" side of Singapore that most package tourists would not get to see. They were amazed that in our "clean" city of Singapore, we had allowed these dark lanes to become an open place for Asian prostitutes to ply their trade openly. Most of these night workers came into Singapore under the government open door policy of attracting foreign talents to boost our economy. Though there are frequent anti-vice raids, the "problem" is never eradicated. We had chicken rice and satay (barbecued pork) at one of the coffee shop along the dark lane and witnessed how the ladies ply their trade. 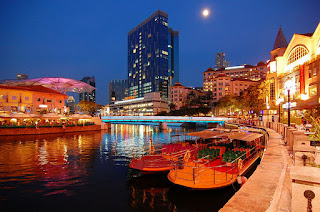 An hour later, I brought them to Clark Quey, another popular night spot for late night revelers. This place boast a colorful kaleidoscope of restaurants, wine bars, nightclubs, retail shops and you name it, they have it. It's the opposite of "Geylang" district, with clean fun and mostly decent patrons Though it was close to 2am, the place was still bursting with activities of all sorts like people dinning and drinking at wine bars, water taxi plying along the river, loud music from nightclubs and shoppers at roadside stalls.We spent an hour strolling through the canopy of shops, bars, and live bands playing at some spots They had a few glass of wines and also bought some souvenirs like black pearls, silk slippers and a collection of Singapore stamps. For me, I would never had a chance to visit this place if not for the couple's impromptu excursion.

ChinaTown in the Day 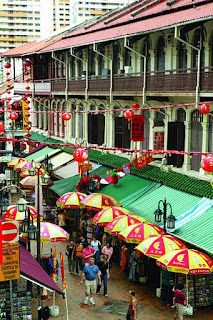 As Chinatown was nearby, we drove there to see the old architectural shop houses that were conserved as national heritage and for posterity. Most shops were closed but the lighted facade of the buildings with intricate designs and signboard in Chinese characters were interesting enough for the couple. In Chinese, Singapore's Chinatown is known as Niu che shui ( literally "bull-cart water") as a result of the fact that, because of its location, Chinatown's water supply was principally transported by animal-driven carts in the 19th century. The name is also echoed in the Malay name, Kreta Ayer, with the same meaning.

Finally, my watch showed 5am and we hurriedly drove to the airport to catch their connecting flight. They paid me $150, the extra as tips. It was good money for a few hours of work and at the same time, I had the rare opportunity of visiting Clark Quay and gained some experience as an unofficial tour guide.
Posted by Diary of a Singaorean Cabby at 6:02 pm