Can I Kiss You? 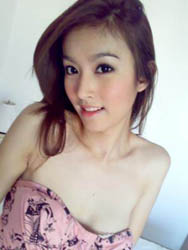 Last night, around midnight, a white man in his fifties and an elegantly dressed lady in her late twenties boarded my taxi at the famous Orchard Tower. They wanted to drop at two places, first, a condo near Lavender MRT and second, Geyland Road.

I reckoned the lady must be a "lady boy" from her demeanour and the fact that we were at a popular transvestite "playground". And sure enough, my suspicion was confirmed when they began to talk. "Her" manly voice was hoarse like a voice from a damaged recording and my hair stood up like a porcupine on hearing it. They appeared steaming drunk as their conversation were incoherent There were more actions than voices at the back seats when I set off.

On arrival at the condo, the white man staggered away without a word to the "lady" or paying my fare. So, I politely checked with the "lady" and "she" assured me that "she" had cash to pay the fare with an "OK" sign of "her" delicate fingers..

After the man left, "she" astonishingly moved to sit beside me. As I placed no valuables in my front seat, I had nothing to worry about. Then, like a witch, "she" transformed herself from a "whore" into an intellectual. "She" started to talk intelligently and eloquently about a guy book "she" read recently but I gave her scant attention. She was amazingly beautiful like an angel, with big eyes and long silky hair. "Her" bosom was voluptuous but "her" voice was horribly distasteful and I felt like having a beautiful alien in my cab.

Soon we arrived at her destination. She handed over the fare of $12 and shockingly asked whether I would to join her for a beer in "her" room. Stunted as I was, I replied, "thanks, but no thanks, I've to get back to work". She then pulled out a separate $50 note and happily offered it to me as a tip.
I said "don't be stupid, you'll need that tomorrow".
Upon my refusal, "she" asked "Can I kiss you?"
I said "Ok, on my palm not my lips". She staggered out of my cab without a word and I jet off like a fighter pilot. I think she "loves" me because she was senselessly drunk, like the lyrics of this video.

Can I Kiss You Tonight = I Love You When I'm Drunk.


Posted by Diary of a Singaorean Cabby at 3:51 pm