Today-9thAug.2011 is Singapore National Day. Our country celebrated its 46th birthday at the Marina Bay Floating Platform, with a crowd of about 27,000 people. Precisely because of the large crowd in the city areas, I took a day off from driving to spent time with my family. Unfortunately, each member of my family had a pre-arranged program of their own and I was left alone at home. At 7pm an old friend called and I suggested that we have fish and duck porridge for our dinner at one of my favorite hawker stall at Block 116, Aljunied Ave 2. #01-11. 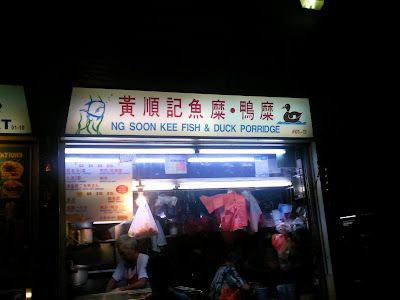 When we arrived, there was already a large crowd of customers waiting for their orders. I ordered a bowl of fish soup, a plate of dark sauce duck and two bowls of white rice for two persons. Because the business was very good, our order came about forty-five minutes later and only after a few reminders. This stall has been around for more than 25 years and sells only fish soup and stewed duck. The owner is a couple in their mid-seventies. I didn't have  a change to chit-chat with them as they were busy serving  their customers. 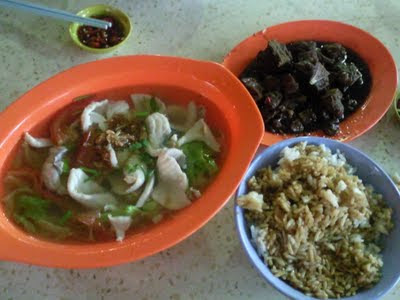 When our two dishes arrived, the fish soup was steaming hot while the stewed dark sauce duck was lukewarm. The soup was Cheng (lighter and less oily) with hardly any trace of msg. (monosodium-glutamate) and not salty. It has a reasonable amount of fresh lettuces, two slides of fresh tomatoes and some "tee paul" (deep fried thin slide fish) which give the soup a crunchy flavor. There were about 20 pieces of fresh sliced "Batam" fish fillets. The meat of the fish was tasty and fresh. This dish costs $5. For a single person, it costs $3. No complaint. They have pomfret too which cost a bit more.
The flavor of the dark sauce duck was perfectly balanced. However, it does not emits a fragrance that we normally get from stewed meat using cinnamon and star anise. The duck meat was tender, not over stewed and in cut pieces. Overall, it was acceptable though a bit more salt would be perfect. What could we expect more for a dish that costs $3. The whole meal cost $9 for two persons. This is a good stall for an economical and healthy dinner of fish and duck porridge.

Posted by Diary of a Singaorean Cabby at 12:34 am