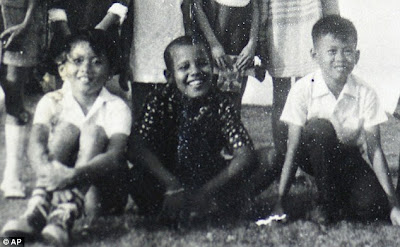 As a taxi driver, I do receive all kind of strange requests but never before had I been asked to solve a passenger's predicament.  In executing my customers' request or rendering my help in whatever form, I always bear in mind that it must be within my physical capability and lawful. Sometime, the final outcome could turn out to be quite unexpected. I know of a cabby who was detained for suspected involvement in an illegal drug case because of his physical assistance in transporting the drugs. But, what I'm about to share with you do not end with such disastrous outcome but with an irony

In an evening, two young teenagers, a Cacausian girl and an Indonesian boy, boarded my taxi at a traffic junction in Ang Mo Kio MRT. In a shivering voice, the boy asked me to proceed to Upper Thomson Road as fast as I could. From his facial expression, he looks worried, panicky and in a great hurry. Request to speed up my driving is quite normal in our fast pace society but the appendix to his request were rather strange. He pleaded with me to help him find his lost cell phone and would reward me if I could find it. Apparently, he was outside his comfort zone and was dependent on an adult to resolve his problem.
However, before I accept his request for help, I tried to establish the circumstances of his "misfortune" and the possibility of recovery, like a detective. It seems that he had lost his cell phone while strolling with his school mate along a stretch of road at Upper Thomson Road. In such a circumstance, I reckon that it would be like searching for a needle in a padi field. In the beginning, I was apprehensive but considering his plight at such a young age and the dreadful punishment he would get from his dad, I agreed to help him, without the reward in mind.

We speed off towards Upper Thomson Road like a fighter jet and within minutes, we arrived and halted at a bus stop along a deserted stretch of road. As the bus stop was where they got off from the bus earlier and began their stroll, we naturally started off from there to begin our search. His cell phone was on a dead mode due to failed battery and therefore it was impossible to get a ringing tone from it to help in our search.
The walking path was dimly lighted and surfaced in grass with dead leaves and small broken branches all over. Slowly we paced along the path with my touch light beaming at every spots and loops. Although we were meticulous in our search, it was of no avail. The phone was elusive. After covering about two kilometers in fifteen minutes and with no sight of the elusive phone, we decided to give up and tracked back to my taxi that was parked at the bus bay. The boy looks dejected and his school mate tried to console him.

As I walked towards my taxi to drive off, I saw the black phone right beneath the front wheel of my car. Had my taxi moved an inch more, the phone would have been crashed. The boy was overjoyed when I handed the phone to him. He wanted to reward me as promised and began to search his pockets for his wallet. His face turned pale with embarrassment when he realized he had lost his wallet.
"This is unbelievable" I shook in disbelief . I toyed with the possibility that this might be a scam to cheat me.  But looking at his innocent young face, I prefer to take things at its face value and believed this was an honest, isolated incident. Fortunately, his missing wallet contain only $30 cash and no student pass, bus or identity cards, nothing else. It was his lucky day. He lost only a small amount of cash but got his cell phone back.
"Well," I tried to light the atmosphere a little, "I'll give you guys a free ride home, wherever it maybe".

In retrospect, I wonder whether I had done a good deed by giving them a free ride or had I been taken for a ride. I like to believe the former.

Posted by Diary of a Singaorean Cabby at 11:58 pm