A Tragedy in the Family 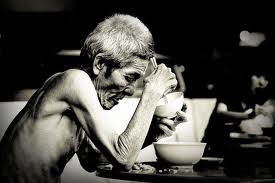 One hour into the evening peak hour, I was waiting infront of  Boon Lay Shopping Center. Time had stood still at this place. Nothing had change much. The same hawker center with rolls of surrounding shop houses had got some minor improvement to its facade but the merchandise sold here are still the same. There used to be a cinema but it had shut down many years ago. The swimming pool still remains but there are no other modern attractions to draw the crowds. Most shoppers had  gone over to the modern shopping mall at Jurong Point, a mere kilometer away The only saving grace is the FairPrice supermarket and the famous Nasi Lemak stall.
With no customer in sight after about twenty minutes wait, I decided to move off to Jurong Point,  As I was about to leave my spot, I saw an old man with a few grocery bags flagging at me to stop. He lumbered along, his body tilting side to side with each heavy step , toward me.

I opened my trunk, he loaded his bags and sat beside me. Then he told me to go to Jurong West St. 91, a short distance away of about three kilometer. Most shoppers lives around this area and usually takes a cab when they have too many grocery bags to go home by bus. He was in shots, singlets that revealed his boney frame and old slippers. His wrinkled face was lined with multiple black spots that elderly people usually have. From my conjecture, he must be at least seventy, retired and poor. But where does he gets the money for all his purchases?, I wondered and asked. "What did you buy?". He was unhappy with my intrusive question and said "What's the problem".
"Oh, no problem. I was thinking of putting some papers beneath your bags in case water leaks from it." I quickly explained.
"All dry items, "Maggie" instant noddle." he interrupted me.
I apologized for asking the question. He said it was okay and understood my concern.
Feeling guilty, I tried to say something pleasant and asked "Taken your dinner?. This is a common way old Singaporean greet each other, like the Westerner's "How are you?".
"Want to buy me one?. I've not eaten since this morning". He replied with a     "are you making fun of me" sober look.
"Really?. What happen?". Again, I asked a stupid question.
He paused a while deciding whether to answer me or not. Then he mumbled softly in a indistinct manner,
"Now, I live alone with nobody around me". His voice tapper off to almost inaudible.
A few second later, he looked at me, with watery eyes "You know, about a month ago, my only taxi driver son was killed by a drunken bully around where you pick me".
As if struck by lightning, I felt a current bolt from my head to my feet. "Oh, my god, That's your son." I froze in shock.
"Yes. That's my son". His tears streamed down his sunken cheeks.
I read the news and it was the most heartbreaking story of a taxi driver tragedy. According to the newspaper report, the taxi driver was killed when the drunken bully pushed him hard and he fell back, hitting his head at the road kerb. I was extremely saddened by the realization that human lives were so fragile and could be shattered at the most unexpected moments. Why such tragedy had to happen?
"My son drives a taxi to feed us. Now he is dead, I really don't know where to get my food". He sobbed.
"Not only my son is gone. My grandson and daughter-in-law are gone too". He struggled to continue in a sobbing voice.
"They've gone away to Vietnam. I don't think they will come back. Now, I'm alone in an empty flat". He wept his tears with his bare hand.
I shuttered "I. I'm sorry.........They will come back to you one day" I tried my best to console him. Could anybody in this world possibly know what he had gone through?. Only a short while ago, I was worried that his bags might dirty my trunk,....I bit my lip and struggled to contain my own tears. But, the tragedy of his life had not yet petrified his emotions and he still shed tears, like me.


Posted by Diary of a Singaorean Cabby at 3:48 pm