A Beautiful Myanmar Girl And A Gay Guy. 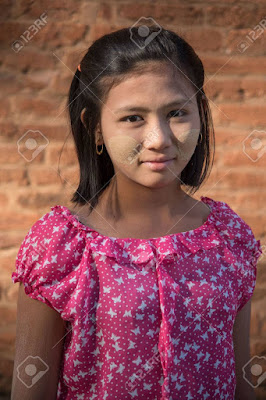 It was yet another slow day in the first week of January and I had just started my morning shift when I was flagged down by a twenty something girl in front of a condo at Cashew Estate.

She was accompanied by an old man who looks much older than me in a wheelchair. So I popped the trunk and got out to help with the wheelchair.

The girl tried to dump the old man into the back seat as I loaded the wheelchair. Somehow, the old man had difficulties landing properly and I tried to help.

"It's ok, I can do it myself" mumbled the girl softly.

She sounded foreign and had two yellowish-white paste on her cheeks. She must be from Myanmar as it's a Burmese traditional custom for girls to apply the cosmetic paste on their cheeks to protect the skin from the sun and for beauty purposes.

"Where to, Madam", I asked expecting her to say the nearest hospital.

Hah?  Why would an old man who looks like someone with dementia and in a wheelchair would wants to visit the casino at that early morning.

Maybe he's out to the casino to chase his children back home or maybe he enjoys gambling his saving before his days are up.

Whatever reason was none of my business.

After a while, I tried to make conversation with the girl.

"Hi,  Are you from Myanmar" I asked cordially.

She replied in halting English, "Yes, How did you know?

I said, "Your two patches on your face are tell tale signs. If you remove them, you look like a local Chinese girl with clear skin and beautiful eyes".

She shyly replied. "Thank you".

All these while, the old man sat motionlessly with blank eyes staring at the ceiling.

"Do you know the "ET of Myanmar", a very famous fortune teller" I asked after a short pause.

"I met her and had my fortune read. I also wrote about her in my blog". I said. (Link)

I couldn't control a burning question and asked "Why are you going to the casino at this early hour".

"Oh, my father runs a business there and I'm bringing my Ah Kong there to visit him" she replied nonchalantly in clear English.

All along, I thought the girl was a poor Myanmar maid working in rich Singapore like thousands of her race.

The English idiom " don't judge a book by its cover" is shockingly apt and put me to shame with my prejudice thoughts.

After I dropped them, I joined the "Q" inside the casino taxi rank.

It was a quiet Saturday morning and the ten taxis ahead of me was hardly moving.

I got out to stretch a bit.

A man came out from the taxi just ahead of me.

Shockingly, it was William Tan, my long time taxi buddy who used to drive the night shift.

"Oh, my hirer's younger brother passed away and I had to drive the full shift". he explained.

"You mean, Peter Lim. He's about fifty, right. Why?". I asked in disbelief and was flummoxed into a split second silence.

I knew Peter since his youthful days as we were neighbors in the same village. He was a bachelor and a bit effeminate by nature.

"Don't tell others. He's gay and died of HIV". William said without batting an eye.

I don't know why, but it never occurred to me that Peter might be guy.

I heard that he likes women dress with its elaborate designs and secretly wears them behind close doors.

Occasionally, he was caught with with traces of lipstick and nail polish on his lips and fingers.

Women's clothing notwithstanding, I didn't think Peter was gay as he never made advances to anyone of his male friends I know or me.

Maybe he did with some strangers. That I'll never know.

Statistically, 80% of HIV diagnoses in New Zealand are among gay and bi-gay guys.

So, am I prejudiced against gay guys if I say they are more likely to die of HIV?

Whatever, Rest In Peace, My Friend!

Posted by Diary of a Singaorean Cabby at 3:32 pm

Sissy Bapok Thomas Didymuz Toh 87882033 wrote about her kinky massage in Rapee Massage, Bangkok again! This slut is grossly infecting everyone with her STDs:

In Bangkok now, visited my fave massage place Rapee a few days back for a good massage after dinner and the therapist, Dee, from my last visit was still around. Dee remembered me and welcomed me warmly with his smile and traditional wai at the door.

Booking a 1.5 hour oil massage with Dee, he was very familiar with the process and worked on my back and aching shoulders, soothing my aches in his gentle way.

When it was timing to turn over, Dee was already full naked with his hard tool potruding out, no wonder I felt something hard poking at me earlier when he climbed over my back!

Dee gave me a very good body to body massage, had to keep quiet not to moan, so as not to let others know. But soon, the hard tool of his could not resist my constant sucking and he came all over my face.

We got dressed and he asked if I would like to meet up later after his work for supper, I was really surprised and agreed to meet him at midnight.

Walked to the lobby to be served with hot tea, tipped him the usual and left.

Wonderful blog! I found it while surfing around on Yahoo News. Do you have any suggestions on how to get listed in Yahoo News? I've been trying for a while but I never seem to get there! Thanks
taxi sacramento airport

Hello, Everyone,I'm Adrik Vadim living in Kurgan City , I want to share with you all on here on how Mr Benjamin help me with a loan of 15,000.000.00 Rubles to start up my food beverage delivery after all I have work in several hotels here in kurgan just to earn a living but unfortunate I was still having difficulties to pay a rent but I thank God now that I'm a self employ now with 5 workers working in my care. Just if you looking for financial freedom I will advise you contact Mr Benjamin with this email below and whats app number as well. lfdsloans@outlook.com +1-989-394-3740

Hi Mr Lim. I am a video producer. We are currently working on a project that will be featuring interesting stories shared by taxi drivers. We chanced upon your blog while doing research and we have enjoyed reading your stories. We would like to seek your assistance with this project. Can I have your contact to provide you more details? Thank you very much!

Hi SY,
Good Evening.
I'm sorry to disappoint you that I can't provide the details you requested as I don't like to participate in any form of media presentation. I thank you for your interest in blog.