Have skateboard will travel. 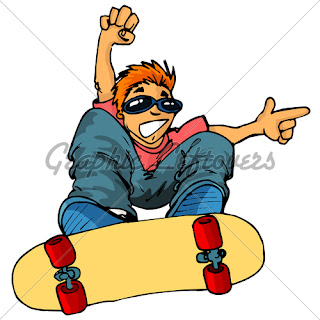 Last Friday around 6pm, I headed towards Mandai Zoo along Bukit Panjang Road, hoping to catch a fare at the zoo into the city. A punkish Malay looking guy, about twenty years old, wearing a batik scarf over his head, some chains, earrings, blue jeans and open top T-shirt with bold "F... Me" words on both sides, jumped into my cab and told me he wanted to go to Eng Neo Avenue. He was carrying a long canvas bag that appeared to have a saxophone in it and he certainly had an unmistakable look of a musician of a local band.

Though the destination was near and the trip would probably take less than ten minutes, I was elated as the direction was towards the city where plenty of passengers awaited me. Punk outfit aside, he turned out to be a good conversationalist. We talked about my taxi driving and his interests in music. And we continued to enjoy the ride until we exited BKE into PIE. That was when we came to a complete standstill in an horrendous traffic jam.

I grimaced in agony. Damn! I had forgotten the usual monstrous after office traffic from Jurong and also the massive road expansion works along PIE. I should have taken the old Bukit Panjang Road towards Bukit Timah. But then it was too late. It would probably take half an hour to get into Eng Neo Avenue.

Our conversation diminished and tension was palpable. We moved only couple of yards in ten minutes and most of the time we were in a standstill. I was not prepared to take the shoulder lane to jump the traffic jam as it would meant a traffic fine of a few hundred dollars and demerit points. Spying the "punk's" tensed demeanor through my rear mirror, I sensed he was hoping that I would do just that. No, I had been caught once and never going to do it again.

Suddenly, the "punk" opened his door, stepped halfway out of the cab and surveyed the situation ahead. Then he got back into the cab and bellowed "F...k.. Bad". It was really weird that a passenger would do that. What was he going to do? Walk?

He was losing money and time. I was resigned to the situation. We were both stuck. I tried to chat up again to divert the gloom of the jam but to no avail. Minutes and the meter ticked by and we did not moved an inch.

"Uncle," he said desperately "I'm going to get out here".

And with that, he passed me a ten dollar note and asked me to keep the chance. The fare was about seven dollars. I was stunned but got to let him go, even at an expressway.

Before he opened the door to depart, I pleaded " Hey, man, don't walk on the shoulder lane. It's dangerous. Some vehicles might speed along it and you'll get hit. I'll turn off the meter. OK?.

"No, uncle, thanks. I'm in a ready big rush" he replied with a smile.

With that, he got out, zipped open his long canvas bag and took out a SKATEBOARD. Wow!!! Soon, he flew out of my sight. I wish I had that punk's agility, daring spirit and boundless energy in this old frame of mine.

Posted by Diary of a Singaorean Cabby at 6:47 pm

Must say first encounter of such a kind.

Wow, skateboarding along the shoulder of an expressway. It's really dangerous considering how cars love to drive shoulders during a bad jam like that one.

It was a really excellent and dangerous skateboard skating video.After seeing this video my advice for kids are "Don't try this are at home or school"

People have passion for playing games and this could be most engaging factor. Among the list of reasons that you prepare you add up one reason as that these games are refreshing.