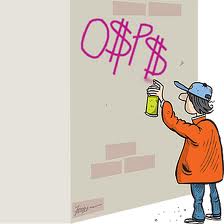 Every New Year begins with hopes. For me, every day is a New Year day, with lots of hope. In the beginning of every shift, I hope for a few good airport runs, hope for steady work, hope for big tips and a safe and accident-free day. I also hope for a good story. Sometimes the story happens to me, but sometimes the story happens to my buddies. But it becomes everybody's story, nevertheless.

This is a real life story that happened last night. This is how it goes:-

It was the slowest part of what was a dull evening. The kind of evening in which you're so desperate for work that you wouldn't care if he had a butcher knife in his hand, so long as I got a fare, I felt lucky instantly.

The 24-25 look-chap was wearing a baggy blue jeans and an old white polo T-shirt with a "snowflake pattern - like splashes of random art work". He also had a sling bag over his shoulder and looks nervous, with a crazed look in his eye. But, he was nothing special.

He burst into my cab. "MOVE IT!" he shouted, slamming the door.
"Where to" I asked.
“Uhhh. . Bedok, and HURRY!”
He smelt of thinner and his hands were stained with paints.
"Just get moving NOW!!”
"Okay, okay". I punched the meter and flew off.
I then saw a middle-aged woman running towards my cab. She was waving and yelling, pointing at my cab.
"Is she with you?" I asked.
"NO! C'MON, MOVE IT!!" he shouted.

In the next breath, before my cab could move off the car park, the street was filled with cop cars... two or three cars, all lights flashing. They screeched to a stop, blocking my cab, and in the next second they were are all out of their cars, swarming, ready for battle.
Holy shit... And then it became clear.
Hey, are they looking'..........?
I didn't even finish the question before the back door flew open and the young chap was gone, leaving his sling bag behind. I turned in time to see the guy's back just as he turned the corner at a full sprint. While the rest of the cops hauled off in pursuit, one cop pointed at me to pull over. I was a suspected accomplice and had to give all my personal particulars to the police officer as demanded. It turned out that my customer was involved in loan shark harassment activities in the estate and the police had been waiting for him in ambush. The abandoned sling bag contained cans of paints, gloves, marker pens, screw drivers and pen knife.

After fleeing my cab, the man ran down a side street and into a row of shop houses. He ran up the stairs, climbed out onto the roof, jumped onto the neighboring house's roof (like a James Bond movie). Amid the shouts of police officers below, he stood on the peak of the roof and weighed his options... and sat down to smoke!. He then took out his cellphone and called his wife. After a long talk with his wife, he asked the police for a ladder, which they used to help him down and into an awaiting police car. All this while, I was a spectator in a large crowd watching the unfolding drama.

After patiently answering all the police's questions, I got back into the cab and finished my shift. I lost a fare but was rewarded with a story to post. It was an interesting, albeit slow evening, indeed. Not a very good start to a New Year and a bad omen. 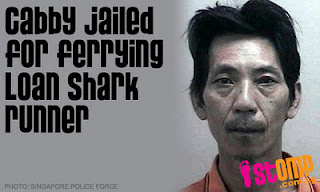 Posted by Diary of a Singaorean Cabby at 2:55 pm

Since the guy was on the roof, how did you know he called his wife?

The wife came to tell the police that she could persuade her husband to come down from the roof after she received a phone call from him. She was in person for all to see at the scene. Thanks for your comment.