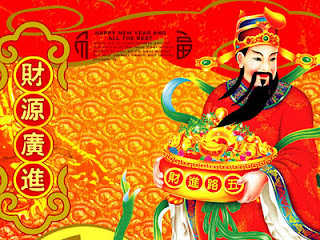 Like most Singaporean, I started work on the 3rd day of Chinese New Year, after two days of celebrations that had drilled a big hole in my pocket. On my first day of work in the Year of the Dragon, I was hoping for a memorable and good start, with many airport runs and lots of tips. Today, I drove the day shift in exchange with my hirer. As I've an interesting story to tell, I rushed home early and posted it a few hours after my work at 12 noon, least I forget and partly because of the interesting happening in the day.

Whoever is Chinese in appearance and got into my cab is greeted with a friendly "Kong Hee Fatt Choy" and my many other pleasantries. This is the special game I like to play during this CNY festive period. Most of the time I would get a return greeting and nothing else. But it is the very first passenger that I really look forward to on my propitious day of work. If I get a tip, no matter what amount, I know the day would be a "prosperous" one for me. Unfortunately, my first passengers turned out to be a group of Arab tourists who could barely speak English and had no appreciation whatsoever of this auspicious day. In fact, Arabs, like the Japanese, are the worst tippers from my experience, as tipping is not customary in their culture.

But I knew today is a good tipping day and I was not deterred.

After dropping the group of Arabs at Marina Bay Sand Hotel, I proceeded to the rank at the opposite casino. First in the queue was a Chinese man of fifty something, in business suit and a travelling bag over his shoulder. "Airport" he said with a foreign accent, like those spoken by HongKongese or Mainland Chinese. Although he look tired, he had a nice smile and a prosperous big nose on a chubby face, like the God of Fortune. Unfortunately, things got off to a bad start right away when he lit a cigarette without asking permission. I immediately told him to put it out, as it was against the law. I could get a ticket,... blah,.... blah,.... blah. But the guy was persuasive and convinced me that since he would have only a few puffs and he would die if he didn't have that cigarette. So, I let him smoke it as long as he agreed to keep it out of sight. I empathized with his desperation for a fix as I'm a smoker too.

Well, apparently this was enough for him to make us both pals and he went on to tell me about his good fortune at the casino table earlier and his faultless tricks of winning at casino games. I recounted to him my by-gone days of misfortune at casino that eventually led me to my present job as a taxi driver but he was adamant in teaching me his winning tips. I patiently took his "advice" at one ear through the other ear like wind passing by the ears. Nothing will ever get me back to my stupid path of gambling in casino, not even with God whispering into my ears at the table before each bet. By the way, the main point of his gambling trick was to know when to stop and not to be greedy! Every gambler knows this but it's easier said than done. If I had faithfully followed this simple piece of advice, I won't have landed myself as a taxi driver today!. Sigh.....sigh!

Anyway, I just kept acknowledging anything he said when the conversation between us ended abruptly as we neared the airport. Suddenly, he requested that we turned back to the casino!. He didn't tell me the reason for the sudden changed of destination but I was naturally pleased with a double distance fare. There wasn't much to talk about on the return trip, as we had probably exhausted all the issues in our main topic of conversation earlier. He gets to smoke another cigarette though, this time he asked politely for my permission.

Now (if you're still with me), you know a fare like this will turn out to be a winner. I had been polite, patience and accommodating. He seems like a winner, eager to dispense his winning tips, not a looser, silently brooding over his lost. I was a good listener and he was anxious to have an audience to share his good fortune. We were a perfect pair. I was speechless when the guy gave me two red crispy $100 note from a rubber-banded bundle, for a $50 fare. Wow!! it was a $150 tip, an amount that's more than my expectation, an amount that's more than my whole day of driving. I never had such a big tip in my five years of driving. It was a propitious omen for a Dragon Year. With that tip, I was tempted to call it a day immediately, but continued driving diligently till 12 noon. With only four hours driving, I had earned enough, with that generous tip included. For the rest of the shift, there was nothing to write.

Going back to my "God of Fortune", I thanked him profusely as he handed me his big tip and good heartedly reminded him of this earlier advice to me --- don't be greedy!. He gave me a wide smile and walked into the casino. I hope he practises what he preaches and not land himself, like me, to become a taxi driver eventually.

Posted by Diary of a Singaorean Cabby at 5:07 pm


I enjoy reading through a post that will make men and women think. Also, thank you for allowing for me to comment!sbobet CASINO


Oh my goodness! Incredible article dude! Thank you, However I am having problems with your RSS. I don’t know why I cannot join it. Is there anybody having similar RSS problems? Anyone that knows the answer will you kindly respond? Thanks!! online games


An interesting discussion is worth comment. I do believe that you ought to write more about this subject matter, it may not be a taboo matter but usually people do not talk about such subjects. To the next! All the best!!agent sbobet

There's definately a great deal to find out about this subject. I love all the points you made. Sbobet games

I’m amazed, I must say. Rarely do I come across a blog that’s equally educative and engaging, and without a doubt, you have hit the nail on the head. The problem is something too few folks are speaking intelligently about. I am very happy that I stumbled across this during my search for something relating to this.
best online betting sites


I need to to thank you for this great read!! I definitely enjoyed every little bit of it. I have got you book marked to check out new stuff you post…sbobet


I needed to thank you for this very good read!! I definitely loved every little bit of it. I have got you bookmarked to look at new stuff you post…IBCBET