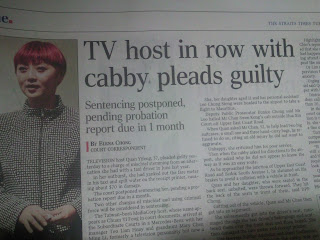 The news is out. This time, "The Straits Times" had the audacity to report it. TV host, Quan Yifeng, 37, happily pleaded guilty yesterday to a lame charge of mischief, stemming from an altercation she had with a taxi driver in June last year. Mischief  is a conduct that playfully cause petty annoyance, like a gentle pinch on the ear. In comparison, it seem that throwing a cigarette butt on the road is more serious than her kicking the taxi driver's groin and thrashing the interiors of his cab. A litter bug gets a fine and/or jail, whereas she will gets only a written warning.

Since she is "mischievous child", the court imposed only a probation report on her. This is the first time the court called for a probation report for an offender over 20 years old. This is done only under exceptional circumstances. Previously, only a juvenile delinquent below 20 years old are allowed to go free on probation but she is 37 years old. She is an over grown celebrity child in the eyes of our court and qualified for exceptional consideration.

Surprisingly, the prosecution accepted the judge's decision in acquiescence - without a word of protest.. Indeed, it's a rare decision from all the court officers. If she completes the probation successfully, she will not have a conviction, i.e. it will be considered as no offence. She will go scot-free and laughing to the warm embraces of MediCorp, her very supporting boss.

Like I said in my earlier post, courts sentencing and decision are often like the unpredictability of the final result of a soccer match. Sometime, "kelong" is involved. For the benefits of my overseas readers, "kelong" is a modern Singlish usage. The word kelong is now used as a suggestion of match fixing by referees, in particular in the context of soccer.

Undoubtedly, her smart and influential lawyer, Mr. Subhas, had done a great job for her. With his stature as President of Singapore Association of Criminal Lawyers and a medical report from a paid psychiatrist, he got all court officers to innocently believe that Quan had a history of longstanding depression and anxiety. She had serious metal disorder, oh poor crazy girl!!. Mr. Subhas eloquently pleaded with the judge that when Quan committed the mischeif, she was sick with depression and should be excused on account of her mental disorder. Oh! please forgive my poor mad girl!!

But the fact is, Quan, had previously been fined twice for getting into a fight with a bowling alley attendant and driving without a licence and causing an accident. She was also on anti-anxiety, anti-depressant and sleep medication right up to the time the latest incident happened. If a sick person is on medication, the condition is supposed to be under control. I think she is a incorrigible aggressive trouble maker and bully of people with lower social status than her, like hawkers, taxi driver and cleaners. Ask her to kick her boss when she is infuriated and I bet to my last dollar, she won't dare. If she dare to do it, than she is really crazy.

Another thing that intrigues me is, why her boss, MediaCorp, still keeps her to host prime time shows when they knew she had serious mental disorder and criminal convictions. She is a role model to many young and innocent audience. Quan was recruited from Taiwan. Maybe she has very rare talent that Singaporean hosts don't have or she had "tricks" in her working place that nobody knows. We, Singaporean needs her rare talent to make this place a better place to live in.

Quan is rich and intelligent. She hired the President of Singapore Criminal Lawyers to fight her case. So, it's not surprising that she got a lame charge only. In Singapore, like in many other countries, if you are rich, you can hire prominent lawyers to get you off the hook from the law. These celebrity lawyers have good connections with court officers and obviously its helps in resolving the cases in your favour. Needless to say, judges and prosecutors are fallible human begins like us, not God. They have temptation and human tendencies too, like treating your own blood or close friends with more love and care than complete strangers. I've no confidence in our judiciary. Only in God, I trust!

I hope the court will give her a sentence that commensurate with her "mischief" and shows that justice is fair to both the rich and poor. Anyway, its only a mischief she committed. If I were Quan, I'll skip taking the sleeping pills tonight and have a sound sleep, knowing that I will keep my job and become more popular soon. I've a good boss looking after me, why worry? Maybe my boss had already prepared more prime TV shows for me to host and a few year end popularity rewards for me.   Thanks, MediaCorp!!

In conclusion, I hope we don't have a kangaroo court here because that's the last thing we want in Singapore. A kangaroo court is a mock court in which the principles of law and justice are disregarded or perverted. The outcome of a trial by a kangaroo court is essentially pre-determined. Lets wait and see what happens on Dec 29, when the judge pass a sentence after her probation period. "Quan, you are free to go but don't get into trouble again. Be a good girl, ok?" 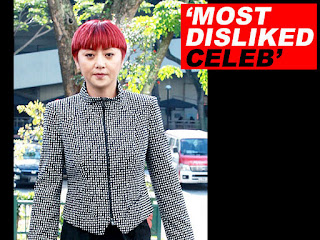 Posted by Diary of a Singaorean Cabby at 7:09 pm

James ,, i belived that in this red-dot so called Sillypore is doing 1 country 2 system !
U can get away by getting a "GOOD" lawyer (if u can aford)!
sian !!

My Lim-
I enjoy your articles. I hope you saw my letter in todays (January 26, 2012) Straits Times regarding taxi fares and support of drivers. There remains much to do to help Singapore's best goodwill ambassadors - Taxi drivers. I can be contacted at m.dee@mac.com.
Best regards,
Michael

Sorry for a late reply to your comments. Yes, I read your letter to ST. In fact, I read two of your letters. Well written. Thanks for supporting us - taxi drivers and thanks for your encouragement on my blog. Bye