The Poor of Singapore 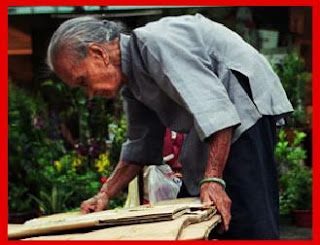 In the still of the night at 1am, they seem like dead men walking. A troop of about 200 soldiers in FBO (Full Battle Order) were marching along Mandai Road, as I passed them on my way to the nearest coffee shop. Some hobble and some limp, their bone-weary and heavily-blistered bodies barely holding up the weight of their battle gears. They are the picture of extreme fatigue but the proud guidance of Singapore's sovereign integrity, the true sons of Singapore.

As I drank my coffee and with sights of the army march still fresh in my mind, I start to reconcile the many sacrifices these young men must have made. Apart from the gruelling trainings that stretch their physical and mental strength to the limit, many had postponed their studies, careers, plans and ambitions to fulfill their national service obligations. In the end, with these young men, Singapore now has a modern army capable of defending itself and I felt proud.

But in the same breath, there are some aspects of Singapore that saddened me. These are the sights of destitute scavenging for leftovers in coffee shops, trash in dustbins and the homeless sleeping in the void decks, parks and sideways. I always have a soft spot for elderly man and women pushing trolley with loads of cardboard along major roads trying to make a decent living. These folks may be old but not weak, alone but not forlorn, poor but not without dignity. I've more respect for them than those who sit high on the social pyramid and have everything: wealth, power and fame.

Words cannot describe the hardship of those poor and marginalized people, who had somehow slipped through the cracks of our meritocratic society. Of course, in every modern cities there are scores of such poor souls, large and small. My point is Singaporean are lucky to have a capable government that look after the majority well, but is the same Government doing enough for the very poor?. No!. Only 0.3% of our budget is allocated as public assistance to help the poor. Expenditure on health care is lower than elsewhere - it's only about 1.6% of GDP:- nearly 4 times lower than the 6.1% elsewhere!. More help should be rendered to the deserving poor and the Government anti-welfare culture and mindset must change. Only when poverty is eradicated, then we can proudly call ourselves a First World Country, not how many golds or silver medals we wins in the Olympics or how much we have in our reserve.

Like I said earlier, words cannot describe the reality better than seeing photos and videos of the poor and sad side of Singapore. Here are some for your sober viewing and hope it tickle your heart somehow. You might want to read more of poverty in Singapore at this link:

The Poor Had Become Poorer, And the Rich Become Richer


The Poor And Homeless

Trying to Make A Living


Posted by Diary of a Singaorean Cabby at 4:27 am