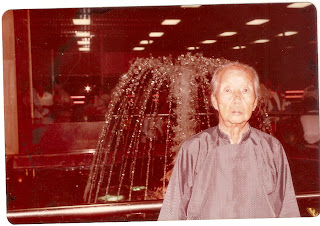 Now, in my sunset years, I had frequent flash of memories of a few affectionate people who have left me a long time ago. Fond thoughts of them keeps resurfacing in my mind . Regretfully, their love and affection for me then were not understood or appreciated. I wish I could call them now and tell them how much I appreciate their love and affection for me. The first person I would call is my Grandmother. I remember her with much affection and above all, admiration. She died naturally 25 years ago at a ripe old age of 95.

Ah Ma, as I lovingly called her, was one of those women who could be said to have come from a long line of strong, resilient, resourceful women going all the way back to the ancestral country. In her late twenties, she walked for days from her remote village in Fujian, a province of China and then sailed in a wooden junk for weeks to arrive Singapore in 1925. As an immigrant, she arrived with nothing more than sling of personal belonging over her shoulders and a hope for a future here. Unfortunately, I do not know much about her past before her arrival in Singapore. What I know is that she had my father as her eldest son, an uncle and two daughters in Singapore. My grandfather died during the Japanese Occupation in 1944 from serious complication of a leg injury. I had no recollection of him at all because I was not born yet.

Though the family were poor, Ah Ma had this amazing stoicism in keeping the family intact through the greatest misfortunes and crises. She brought up her children single handily with enterprising spirit and business skills. She sold many stuffs, one of which I remember was toddy ("samsu " an Indian word), a popular high spirit drink among the Indian laborers, brewed in the forest from yeast and fermented rice. Even with limited resources, she helped my parents, who had 9 children, in whatever way she could, mostly financial and paid for my entire education and daily expenses when I was a teenager. Of all her 40 over grandchildren, she loved me the most, probably as a traditional lady, she believed that the eldest grandson is similar to a son. She ensured that I was the best fed, clothed, educated, received the biggest "ang-pow" ( red packet stuffed with cash) during the Chinese New Year and the only chicken drum stick on the dinning table. I became the envy of my uncle's family, resulting in numerous family squabbles.

I slept with Ah Ma on the same bed from a month old till I was about 10 and continued to sleep in the same room with her till my late twenties. As a young boy, I was terrified by her loud snoring while sleeping beside her. She cared for me more than my parents, as they had a handful of children to worry about. Whenever I had the lightest of fever, Ah Ma would stay up all night to sponge me to sleep and would specially buy for me my favorite "fish ball noodle" for my dinner. It was a luxurious dish to have during the difficult time of the fifties and sometimes I would duped her by pretending to be sick to have it. And whenever I was in a terrified situation, like being chased by a ferocious dog or bullied by a bigger boy, I would screamed "Ah Ma, Ah Ma" for help. In my growing up years, she gave me endless love, confidence and security.

Although with no formal education, she sent me to an English school, believing that an English education would ensure that I would be able to get a good job in the civil service, which was prestigious at that time. My siblings went to a village Chinese school. She watched over my progress in schools like a hawk, scanning my report books for the one sign she understood that told of bad school performance: RED ink. I remember once she threw my school bag out of the house, when she discovered that I had forged my father's signature in my report card. In the end, I did not disappoint her in my studies as I was always promoted to the next level till my pre-university days.

My Grandmother with my 1 year old son. 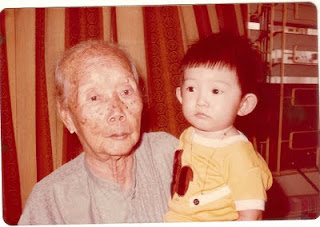 When I started my first job in a factory, she would wake up before dawn, regardless of state of health, to cook pork porridge for me, worrying that I might be hungry before work. Today, I deeply regret that I frequently shouted at her when she persistently screamed at me to wake up from my slumber in the morning to get to work. My son is doing the same thing to me now. In my youthful years, with slant moral values or total lack of it, I did a few very regrettable things that must have hurt and destroyed my grandmother heart completely. I remember abandoning her to stay out on my own after a minor quarrel with her. It was only after my friends came telling me that since the day I left, she had been waiting outside the house every night for my return. I shamefully realized then that I had done the most ungrateful and heartless thing to her. I wish I had kneel down then to seek her forgiveness but she was happy just to see me back with her again. Her love for me was unparalleled in it selflessness. Her greatest joy was when she carried my son for her first photo shot.

There was nothing that Ah Ma wouldn’t do for me. I can still see her, clad  in a black silky trouser and light blue shanfu, her hair gathered into a tight bunch at the back of the head, her face and neck dripping with sweat, drawing water from the well. I can still her loud scolding voice, laced with the colourful expletives of Hokkien, daily dispensed to the neighbors in the village. She had two distinctive "Bugs Bunny" front teeth that makes her shy to have photo of herself. However, to me she was the most beautiful woman I ever known.

Today her two sons are gone but her two daughters are still alive and well in theirs late seventies. Her 60 over grandchildren and great-grandchildren are mostly successful in their various professions. I remember Ah Ma with so much love it hurts, and the mere mention of her brings fond memories and sometime, choking tears. I miss you, Ah Ma. 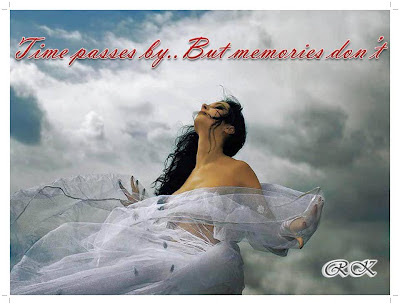 I think your blog has potential if you focus on writing about your daily experiences as a cabbie. I gues I am a bit like like you, maybe a few years younger and is starting off as a cabby too. My blog is more about life's transitions. Its sunnysunsetdays.blogspot.com

nice memories.. i like reading your blog.. i miss ah chor n ah ma too

Hi, Sunny,
Thanks for your comments. I appreciate them for whatever it is. Hope you'll enjoy your new job as a cabby. It takes a lot of patience to handle our passengers, esp. when you're a rookie. They are usually in our cab for only a short while, so it pays to bear this in mind. Keep in touch. Good Luck.

I've never met your Ah Ma before! No recollection of her at all..