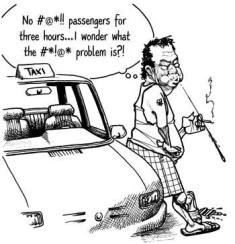 I had not earn any money this week mainly because of my disrupted sleep, resulting in me spending little time on the roads. I hope with the up coming Friday I could recoup my lost in earning. Usually, on Friday evening, the crowds are everywhere. It's quite easy to pick passengers on Friday not other days. I usually made about 20 to 25 trips on Friday and earns about $100 after deducting rental and fuel. By nature and partly because of my age, I'm quite a lazy chap. I frequently take it easy the following day after a previous day of good earning.

Generally speaking, what I earned as a cabby is spent on household expenses, which can come to about $1,500 per month. The extra that I've is spent on buying the 4D. Poor man like me has only one hope. That is to strike the first prize in a 4D. When and where can a cabby hope to have $40k instantly?. If I'm not wrong, most cabby has no saving. They collect cash in their work and it's naturally difficult to save when you have cash in your pocket. You tend to spend it. The wise guy will rebuke you for not having the discipline to budget your income. It's easily said than done. That is why, I always advocate that young man should not drive taxi. They will have no saving when they reached 55. Whereas a young chap who works in a factory with CPF contribution will be able to see some money when they hit 55.

In Singapore, when a chap is retrenched at 45, it's very difficult for him to find a suitable office job, unless he is academically highly qualified with years of useful experience. Even that, the prospective employer will offer  lesser pay. The reason is, we have millions of foreign workers who are eagerly waiting at the employer's door to take up your offer if you reject it. Take the case of Dr. Cai Mengjie. He is probably the only taxi driver in this world with a PhD from Stanford and a proven track record of scientific accomplishments.  He was forced out of his research job at the height of his scientific career in "A-STAR*, as a principal researcher. Unable to find a suitable job, for reasons he described as something "uniquely Singapore", he drives a taxi to make a living and wrote  real life stories in his blog just to make the dull job a little more interesting.

Driving a cab is not too bad an occupation especially if you are retired and have no major financial commitments. You are your own boss and have the liberty to regulate your own working hours. With no manager to breath down your shoulders, you manage your income at your perils. In Singapore, we have about 100,000 licensed taxi drivers. Most of them are not active drivers but have a vocation license as a backup in case of becoming jobless. In time of economic downturn, there are usually more cabbies than passengers on the road.
Posted by Diary of a Singaorean Cabby at 9:51 pm