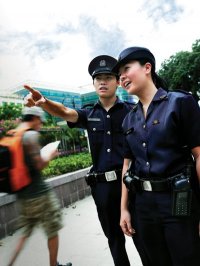 A few years back, fraudulent accident insurance claims were rampant.
I remember a case of a mastermind behind a group of people who conspired to claim compensation for injuries purportedly sustained in traffic accidents amounting to nearly $96,000. The mastermind was eventually jailed for six years and his six accomplices were each given one year jail sentence.

The police became very vigilant and investigated almost all cases of personal  injuries accident insurance claims for suspicious fraud. Unfortunately, I became a "victim" of their over zest work ethics.


This was how it happened,
On 20/9/2009 at about 1.20am, while cruising along Serangoon North Ave 4, I stopped at the traffic light junction and waited for the traffic light to turn green.
Suddenly, a yellow taxi collided forcefully onto the rear of my vehicle.
I felt a strong jerk and the strong impact shook my body violently.
I felt giddy and nausea and had to take a few minutes to get out of my taxi to check the damage.
By then the other taxi driver was already out of his cab smoking a cigarette. I lighted one too.
He looks like about my age but was much slimmer with an over size shirt.
I told him that it was his fault to hit the back of my taxi and reasoned with him that since we were both taxi drivers with meager income, I asked him to compensate me $100 to settle the matter amicably.
He flatly refused my offer without giving any reason. I was stunned by his refusal.
I then informed him that I had to claim the damages sustained through my company and drove off immediately to deposit my taxi at my company workshop.
Because I suffered considerable pain on my neck, back and chest areas, I sought medical treatment at a clinic and was given medication and 3 days medical leave. I also made a police report and submitted an insurance claim for personal injuries through my lawyer. Our company had taught us to use this procedure for all claims.

About a month later, the Traffic Police called me to attend an interview at their HQ in Ubi Road regarding the accident. I arrived punctually and was interviewed by a young Chinese female police officer. She looks gentle and demure, more like a kinder-garden teacher than a stern police officer. But I was wrong when she started to query me fiercely on every sentences of my police report. She was hoping to discover discrepancies in my report during the interview. But I stuck to every words in my report and did not squirmed under her questioning. I left an hour later feeling relieved.

Another month passed and nothing happens. Then one evening, I received a letter from The Commercial Affairs Department of the Singapore Police Force. The contents of the letter was serious. It says that Under Section 120 of the Criminal Procedure Code, I had to attend an interview for investigation into a case of Cheating. The letter of summon clearly stated that failure to comply with the order might constitute an offence under Section 174 of the Penal Code, Chapter 224. I was shocked as I've never ran foul of the law in my life except for speeding and beating traffic lights.

Nevertheless, I arrived at Cantonment Road HQ smartly dressed in long sleeve shirt to give a gentleman appearance instead of a hooligan. At the waiting area, the walls were filled with framed hanging of countless newspaper cuttings of previous convicted cheating cases. It gave me an uneasy feeling but I told myself that I had nothing to fear. After a short wait, a short, skinny man with long hair ushered me to his office. He looks more like a petty thief than a senior investigation officer. Looks can be very deceiving.

Without wasting any time, he started to interrogate me on whether I've connection with a group of known insurance claim fraudsters. Placing photos of previous convicts on his table, he tried to intimidate me to admit my acquaintance with them. But they were total strangers to me and I vehemently denied any connection. When he questioned me on my police report of the accident, I replied eloquently in perfect English and he was visibly impressed.  All this while, he was typing my answers into his computer. Finally, he passed me my statements and I signed it without hesitation as they tallied totally with my original report. I heaved a sigh of relief and left the office.

Almost simultaneously, two letters arrived at my letter box about a month later, The first was from the Traffic Police. It states that their investigation into the accident has not produced any substantive results and their findings do not affect insurance or civil claims.
The second was from the Commercial Affairs Department. It states that after having carefully considered all the relevant facts and circumstances surrounding the case, they are of the view that no criminal offence were disclosed.

In retrospect, my experience with the police had not change my perspective of laws in Singapore. As long as you are innocent, you have nothing to fear.

Posted by Diary of a Singaorean Cabby at 2:14 pm

but its still sad to say that here we r guilty until proven innocent... such is the feelings u have here

I truly appreciate how you’ve worded your material in this article. I am very impressed with this information and you’ve managed to keep it interesting.