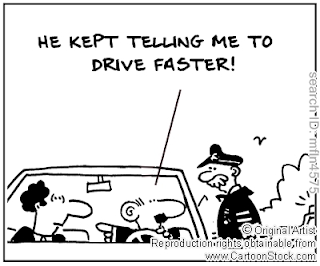 Last night was supposed to be a busy Friday night, with lots of work and good earning. But, somehow, I didn't start work early and got to the Night Safari only at around 9pm for my first passenger.

From experience, I knew that at that hour, a crowd would form at the taxi stand, as it would be the end of the first show and most passengers would likely be tourists heading to their hotels in the city. I was ready to roll in a good job to town with at least a $15 fare. Alas! Somehow, my first passengers turned out to be a local youth with three foreign friends, heading to the former's residence at nearby Woodlands!. My dream of a good trip to the city evaporates into the thin air. It was a $6 job.

Like most taxi drivers, my disappointment with that short distance fare to a out-of-town location at Woodland, was clearly shown in the tone of my voice and facial expression. But, no, not to an extent being angry at my passengers, but just plain disappointment with my ass luck. A divine voice seems to whisper into my ear to warn me that the following hours into the night was going to be hell for me. And I was mentally prepared for the worst.

Now, traditionally Chinese New Year celebration is suppose to last for fifteen days and last night was only the 12th day. Surprisingly, everybody in Woodland seems to be sleeping at that early hour and none were at the roads to hail my taxi. After my passengers departed, I tried my luck at Woodland Checkpoint and was shocked to see a long queue of about 20 stagnant taxi at the rank, with no passenger in sight. Now, what happen to everybody? Had the recent Lunar New Year celebration drilled a big hole into everyone's pocket, just like mine?.

I then decided to return to the Night Safari to catch the next crowd of departing visitors and took the usual Mandai Road. Hungry for a fare and anxious not to be at the back of a long queue of taxi at that place, I pressed hard on my accelerator and speed off like a starving refugee to a food ration centre.

Lurking in the shadow of the lush foliage along Mandai Road, was a bunch of dark blue uniform policemen, waiting to shoot approaching "preys' with their speed guns. Actually, they were in plain view with their "hairdryers" extended but I was so deep in thought with my earlier frustrations that I failed to see them. As I woke up from my "slumbering thoughts", I was being waved at by the cop to pull in. As he approached my cab, I humbly said " Sorry, Sir, I didn't know how fast was I doing?" to which he showed me the speed gun, which had 90 kmph on the display!. There and then, I knew I had another big hole in my pocket!.

"Do you know that this is a 70kph speed limit road?. You're booked for speeding. Can I see your drivers licence". His words were spoken at a speed faster than what I had just done with my cab.That was it, so swift and final!! No warning, no bollocking, no "don't do it again", no "pang-chan"

Well, I've to say that over the years the police have been very fair with me and I've been let off more times than I can remember for many minor traffic offences, but still the latest one was hard to take. He took my licences back to his car to run some checks and he duly returned them to me with a ticket as well. It was a $200 fine with 3 demerit points. He didn't say anything and from experience I never uttered a word too. I drove away totally disillusioned with the job that has seen me incurring fines at an unsustainable rate recently. Writing an appeal letter for a waiver of the fine, either directly or through my MP, is pointless. In the end, I've only myself to fault.

On a happier note, the next passenger at Night Safari sent me down to the city and thereafter, followed by many good runs, I managed to earn enough to cover half the fine and filled up the coffer of the traffic police division. Apart from the speeding ticket, no other poignant situation happens for the rest of my shift. The earlier divine whisper of caution was facetiously forgotten.

I'll end this latest post by sending my deepest condolence to the family of our late Dr. Toh Chin Chye. He died this morning at a ripe old year of 90. He was a founding member of PAP, the political party that govern this country beautifully for the last 45 years. Without him, I might be in a third world country worrying about my next meal, instead of fuming at a ticket for speeding. May You Rest In Peace, Dr. Toh. Thank You!

Well, that's all for now folks, but do check back soon for more!

Posted by Diary of a Singaorean Cabby at 8:52 pm