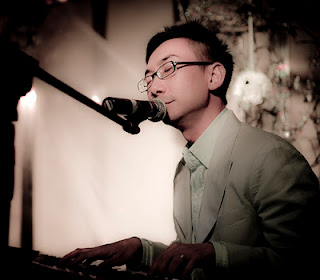 One of the things I love about my job is the fact that I meet all kinds of people.

For instance, last night I had a young local Chinese man in early twenties boarding my cab at Centre Point in Orchard Road. He had a clean, decent look, with neatly combed hair and black rim spectacle, like local comedian Mr. Hossan Leong.  Actually, I did picked the REAL Hossan Leong some years back at a forgotten place and off loaded him at Raffles Hotel. He was the second local celebrity that ever boarded my cab. The other person was Ms. Wong Lee Lin. Mr. Hossan Leong was quiet at the back seat with a Caucasian man then. But this local chap at Centre Point was chatty and sat slouchingly beside me.

"Uncle, please send me to Anchor Point at Alexandra Road". he said with a broad smile.

"Sure, Any preferred route? I asked routinely.

"No, the fastest way at your convenience". came the pleasant reply.

Normally, I don't get his sort of nice answer from my passenger, especially the words "at your convenience". To some drivers, it could mean a trip for an easy "ripe-off" by taking a longer than necessary route. To me and I'm proud to say, it meant I had to think harder for a best route to repay their complete trust in me.

"Uncle, are you celebrating this coming Valentine Day? he asked nonchalantly but stared straight into my eyes for an answer.

"No, I'm too old for that sort of thing". I replied with a surprised look at him and was ready for his verses of advice for an old man on how and why I should celebrate the "Valentine Day". Instead, he came with another dumb question.

"What should I buy for my girl friend",  poking his cheek with his middle finger and smiling broadly as he spoke. His body language were clearly effeminate.

Is he gay or is he that moronic to consult an old man who had just told him that he wasn't interested in sentimental stuff?. Then I thought, gay or moronic, I might as well banter this young chap with my load of raillery.

"Get her an expensive diamond ring or your own cheap, unwashed and "smelly" underwear, so that she would always be reminded of you!". I said jestingly.

"What should I say to her when I give her the diamond ring or my underwear?. he replied, starring through the window blankly like a patient with mental problem.

I was flummoxed into a split second of silence and the proverbial tingle went up my spine. It seems that he accepted my suggestions literally without antipathy. This chap must be a psycho or dumb-ass or was he daffing with me for his amusement. If the latter is the case, then I had a taste of my own medicine.

A few hours later, I had to swallow another bitter pill.

Three fabulous looking Caucasian ladies boarded my cab at MBS Hotel, slightly passed midnight. All were dressed to the niche for the night and looks like they had a wonderful time at the hotel.

"Driver, Can you stop somewhere along the way for me to get a pack of cigarette" a lady asked as I punched the meter.

"I'm not sure there's any convenience store along the way. But, you can have mine for a quick fix". I offered my pack, without giving a serious thought to consequence of smoking in a cab. Till today, I don't know why I did that foolhardy thing. Maybe my recent encounter with the "God of Fortune" was still fresh in my mind and I was hoping for similar "fortune" at the end of the trip.

Well, apparently my empathy for fellow smokers was enough to make us pals. In that friendly atmosphere, we chatted about my past visits to various casinos in Australia and this blog.

"May I've a photo of three of you for my blog". I asked politely.

"Sorry, No. We're famous people and don't want anyone to know we're in Singapore. Hope you respect our decision". a lady replied. The word "famous" built-up images of famous Australia actress like Nicole Kidman and Olivia Newton John in my mind. I took a hard look at them. They were total strangers to me and nowhere close to Nicole,

"Sure, no problem. Are you ladies actress or singers from Australia" I asked spontaneously.

"No, we're authors of a popular magazine for the rich and famous". came a hesitant reply.

"What's the name of the magazine?. I asked as I got more curious and intrusive.

I didn't get the exact name though it was given enthusiastically. Anyway, it was greek to me and I wasn't interested in a magazine that's only for the rich and famous. I'm a proletariat.

Soon, we reached their hotel. The fare was $16.10 cents. Two ladies got out hurriedly and left one to settle the fare. The remaining one placed two crumpled $10 notes into my hand and requested for a receipt, since she could claim the taxi fare. I gave her the change of two $2 notes and was secretly hoping in my heart that she would give me a small tip, since I had offered her a cigarette. But, No, None!. Instead of a tip, she left with a stern word of advice - "Baccarat is a dangerous game".  Is that all I got for my empathy with fellow smokers?

On hindsight, a Chinese's saying floated in my mind :- "Failing to trap a fowl, I lost a fistful of grains". 偷鸡不着蚀把米
(tou ji bu zhao shi ba mi)


Posted by Diary of a Singaorean Cabby at 8:58 pm

Just wanted to say thanks for conscientiously writing throughout your career as a cab driver. I'm a 23-year-old student and have always thought it was fascinating to have a job like yours since you can meet so many different people. It's been very interesting to read your posts; keep it up! :) I hope you meet more nice customers and less of the bad ones. Good luck :)

Hi, Thanks for your nice comments.

I don't write conscientiously, only when I've the time. Also cab driving is never a "career' - it's a job with no prospect of advancement. Don't be a cab driver if you are young - it's a dead-end job. It's certainly not a fascinating job and suitable only for old man, like me.

Yes, meeting different kind of people is interesting but most passengers sit quietly at the back with no mood to talk with a complete stranger. Normally, I use my gut feeling to size them up as to whether they are the chatty or interesting materials or not.

Again, thanks for your nice comments. Keep it coming.

Hi...It is indeed interesting to read your post about your new experiences and your honesty is quite touching. When in cab, I am mostly quiet but I try to size up the driver. If he seems the chatty type, I try to strike a conversation. I find the drivers in Singapore mostly kind (not saying this because of you!)
Wonder if I have already been in your cab

Nice to hear from you again. Thanks for your flattering comments. It's one in a million chance that you were once in my cab. Not likely! Anyway, for an amateurish blogger like me, I always felt "great" whenever I received a comment, irrespective of it's content. Thanks again. Keep it coming. Bye

interesting! although I have no expert, but I want have to know more and more, on your blog just interesting and useful information. Keep it up!

U know what, those folks during my parents' era always thought how great and generous the 'white' people are. But in reality, many of them are also a bunch of cheapskates. Some of them are even more stingy than the mainland Chinese so as to say. I am not trying to generalize any race here, but trying to put across an idea that in every kinda race, there are bound to be KNS idiots like that among them.