I got these two taxi jokes from the web and would like to share them with you. Please don't be offended with the second joke. It's only a joke anyway. Cheers!

A taxi passenger tapped the driver on the shoulder to ask him a question. The driver screamed, lost control of the taxi, nearly hit a bus, went up the footpath and stopped centimeters from a shop window.

For a second, everything went quiet in the cab, then the taxi driver said, "Look mate, don't ever do that again. You scared the daylight out of me".

The passenger apologized and said, "I didn't realized that a little tap would scare you so much".

The taxi driver replied, "Sorry, it's not really your fault. Today is my first day as a cab driver. I've been a driver of a funeral van for the last 10 years".

One dismal rainy night in Geylang Road, a taxi driver spotted an arm waving from the shadows of an alley halfway down the block. Even before he rolled to a stop at the curb, a figure leaped into the cab and slammed the door. Checking his rear view mirror as he pulled away, he was startled to see a dripping wet, naked woman sitting in the back seat.

"Where to Miss?" he stammered.

"Ok, I got it," he said, taking another long glance in the mirror.

The woman caught him staring at her and asked, "Just what the hell are you looking at driver?"

"Well madam," he answered, "I was just wondering how you'll pay your fare?"

The woman spread her legs, put her feet up on the front seat, smiled at the driver and said, "Does this answer your question?"

Still looking in the mirror, the cabby asked, "Got anything smaller?" 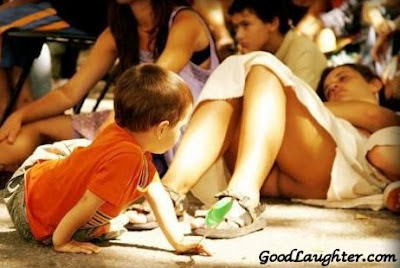 Posted by Diary of a Singaorean Cabby at 5:49 pm

Email ThisBlogThis!Share to TwitterShare to FacebookShare to Pinterest
Labels: Humor

Great thoughts you got there, believe I may possibly try just some of it throughout my daily life...