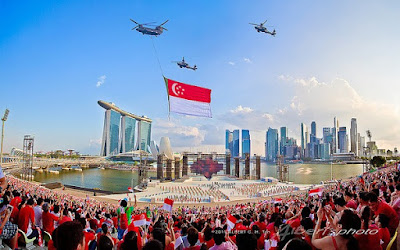 1. Ah Kow from Penang is a Malaysian. He came to work in Singapore and became a permanent resident. After working in Singapore for decades and throwing away his PR permanently,  he collected his CPF SAVINGS and returned to Penang to retire comfortably in a bungalow with a Mercedes car.

2. Li Ning is a student from China who is sponsored by the Singapore Government to study in Singapore. From secondary school to the university, she received a living allowance and free education. After graduation, the Singapore government hired her and asked her to become a citizen. She refused, continued to work for five years, and then returned to China to find a higher-paying job (because of the sponsorship of Singapore, the English-speaking person was collecting her CPF savings).

3. John is a New Zealand (New Zealand) citizen. He was hired as an English teacher and obtained permanent residency three months later. He worked for ten years, collected his CPF SAVINGS and went home to buy a cottage and a Volvo car like the Malaysian guy.

4. Toh Kia keng is a Singapore citizen and a technician. He was laid off because the boss hired cheaper foreign talent. Then he became a taxi driver and found that he could not renew the taxi license unless he paid his Medisave. When he was 55, he found that he could not withdraw his CPF savings as he is forced to set aside most of his CPF money in a retirement fund. When he reached 65, he found that CPF Board used the fund (actually his own money) to pay him about $500 monthly for his living expenses. Then they told him that he had to pay medical insurance from November 1 this year or be put in prison.

Which government can treat its citizens like a digit in a corporation in these unethical, immoral, illegal and abnormal ways? Who allowed them to do these evil acts? You, the Citizen of Singapore.

Posted by Diary of a Singaorean Cabby at 9:22 pm

Email ThisBlogThis!Share to TwitterShare to FacebookShare to Pinterest
Labels: Politics In My Cab

This is indeed a sad ending for the native Singapore citizen who strives to make ends meet.
Going to prison is likely to be his only outcome. I wonder whether he will be entitled to medical care during his time in prison. If no, it is likely that he may not have the chance to come out of the prison if he is down with illness.

Regardless of the outcome, one will have to make do with the circumstances available to him and choose the best possible options. It's no point comparing with the three other individuals. If the said Singapore citizen is destines to die in the prison, so be it. At least, he had tried his very best to improve his situation even if death (in prison) is the eventual outcome for him.