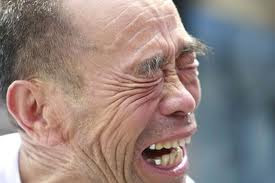 After my meal, I was resting inside my cab at a car park, half asleep, when the rear door suddenly opened and someone threw himself onto the back seat. The noise made me nearly jump out of my skin.

"Uncle, Can go?" the man asked. He was near sixties, scrawny with half his hair gone and shabbily dressed in short and crumpled white shirt. He smelt of alcohol.

"Yeah, yeah, sure," I answered, grumbling to myself that I should lock the doors in the future. I mean, what if he was some crazed robber or something? I could have been be whacked over the head or stuck up, who knows? I mean....

"I'm fine," I answer, composing myself. "You just startled me. Where to?"

He gives me the address. I punch the meter and we're off.

"Yes, I was just having a couple drinks with friends after work. It's been a bad, bad day."

"Recently, I did some very stupid things."

"I wanted to "kill" my wife with a kitchen knife?"

"This afternoon, I was charged in court and pleaded guilty to criminal intimidation and will know my sentence next month".

"Sorry to hear that. What made you do that?"

"Have you got a lawyer to defend and plead for you?"

"Not yet, I've just been in shock. I don't even know what to do. No use now, I already pleaded guilty. Anyway, I've no money for a lawyer"

"When did you see your wife last?"

"Two days ago. I asked her to forgive me but she refused and wanted to divorce me, now."

"On that day, did you hurt her with anything?"

"No, nothing. I thought it was just to scare her. I didn't even touch her"

"It's a terrible stupid mistake?"

"My wife was a divorcee with three boys when I first met her. Her youngest boy was only a few months old then. She keep pestering me to marry her. I agreed and brought up her children for twenty years. Now all the boys are grown up and they no longer needs me. I felt so stupid and regretted many things in my life. I'm only an odd job worker but I honor my obligations as a father and place food on the table everyday. Now, what do I get in the end. I made a mistake with a knife and she used it to send me to jail and divorce me."

"Yeah, she dumps me because I'm poor, stupid and of no use to them now! Well, I'm sorry for what I've done. When I was around 40, I know I'm going to be old some day and wanted a normal family. Now, I'm near 60, I've to give up my dreams"

"And how long will you be in jail?"

"About six months to a year. After I come out, I'll be a different man. Luckily, I've siblings who sympathize with me and help me to get normal.?"

"Unbelievable. After what you've done for the family for twenty years, she don't forgive you for your moment of indiscretion. She wasn't hurt at all. I've heard of jerks getting away with beating up wife and children. Yours is just a conjugal strife but her action is despicable, almost psychotic. I think she's using this opportunity to dump you so that she can benefit from sale of your flat after divorce"

"She might be seeing another man, She's good at it?"

"It's probably lucky it happened sooner than later, because just think of it. If you're now in your seventies and she dump you, you'll be in bigger trouble. You deserve better. Lot's better."

"Definitely. And you will. In the meantime, I'd start thinking of some medieval-style revenge on her."

"You know, she's not worth the time and effort. I think I'll just hang out with my friends."

"I feel better just venting about it. Thanks."

He handed me a ten to cover the $8 fare. I started to make change.

Posted by Diary of a Singaorean Cabby at 3:16 am

Yes. Of course she should forgive him. After all, he only tried to kill her with a kitchen knife.

Yes. Of course it was a small matter. Because even though it was a kitchen knife and he tried to kill her, she got away unscathed, anyway.

If one day my daughter comes home and tells me her husband tried to kill her with a kitchen knife, I guess I'd tell her to go right on home to the kitchen knife because after all, he's sorry anyway.

Thanks for your comment. I appreciate it. Yes, his wife should forgive him but what is done cannot be undone in a court of law. He should reflect on his character for his own good.