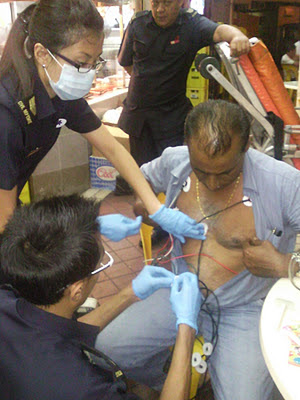 After a night of driving, I arrived at my usual coffee shop in Jurong Central around 4am. All the familiar buddies were already there, having their rest and preparing to head home soon. Roy, my best friend, was having his beer and talking to one of the drivers in a serious tone.
“Did you hear? Ah Kow, died yesterday. He just drove last night and now he’s dead.” I heard Roy said,
"How did he die?, I asked.
“I don’t know; he was having trouble breathing though, a heart attack, maybe” Roy answered.
"He used to give me a ride home, poor chap". Roy was saying.

I knew Ah Kow for about five years. He was a short, stocky Hokkien man, with a bouncy way of walking. Most of us like him as he was friendly and a generous guy. He was about mid-fifties, without much education and had two school going children and a housewife.

Most likely he didn’t have health insurance and probably couldn’t afford to stop driving to rest. It was a sad moment, watching several of the buddies reflecting on a fallen comrade. At the same time, reflecting on how that could be them someday—driving day after day, week after week, year after year as this tough job takes its toll, with no safety net of any kind-----engaging in a struggle-----that is the life of a Singapore cabbie.

Uniquely, this is the only job that you had to pay for not working. With no annual leave, no medical leave, no CPF, no pensions, no holidays, no nothing...but with a rental to pay everyday, we must keep driving every single day. Sitting and driving 12 hours at a stretch everyday, takes its toll on the health of most drivers. Hypertension, heart and kidney diseases, diabetes, you name it, they have it.

For me, I know I’m lucky because I don't push myself too hard. I've CPF Life, a kind of life insurance policy. From it, I get a couple of hundreds every month till I die. I’ve been lucky in so many ways, and how much I’ve taken for granted in my life up to now.

Suddenly, Roy, who was seated beside me, mumbled into my ears.
"James, I think I'm having a heart attack. I'm loosing my vision and can't breath properly"
Oh, Shit! I touched his forehead and arms. They were covered in cold sweat. His lips were turning white but I couldn't see a change in his face colour as he was a black local Indian. I've never witness an heart attack incident before this but I know what are heart attack symptoms.
"Feel any chest pain and numb in your arms?, I asked Roy.
"Yes". he answered with closed eyes and shivering lips.
"Call 995, right away", a buddy shouted.
"OK". I wiped out my cell phone. "Mdm, I need an ambulance urgently at...........I think my friend had a sudden heart attack. It's an emergency. Please hurry. Thanks."

Meanwhile, someone applied medicated oil over Roy's forehead and got him to sip some lukewarm water. Roy had a history of heart problems. He had stem in his heart arteries and is on medication. He drives everyday, never exercise and is over weight. He smokes a pack a day, drinks 3 bottles of "Henniken" beer every night  and eats fatty Indian mutton every evening for dinner. He is a good candidate for a fatal heart attack. If he dies, he had only himself to blame, nothing else.

The ambulance came within 15 minutes. The ambulance professionals got to work right away, taking blood sample to check for diabetes, ECG, pulse rate, etc...etc. I took a photo of their work. Surprisingly, they found Roy stable and asked whether he wants to be admitted into hospital for a thorough checkup. Every buddy suggested he should and he agreed. Again, they found him stable at the hospital and he was out driving on the road after a day stay there. Roy had a lucky escape. If he refused to change his horrible life style, I've to start preparing an early "white-envelop" for his impending funeral wake. Touch Wood!!!!!! Roy, you heard what I just said?


Posted by Diary of a Singaorean Cabby at 8:08 pm