Who She Think She Is! 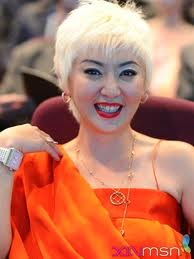 I'm very happy today. Why?. I read in Yahoo News that Quan Yifeng, a MediaCorp television host, recruited from Taiwan, intends to plead guilty to having abused a taxi driver in Singapore in June last year. I had waited nearly 2 years for this good news and I want the world to know that she will face the music soon. Most Singaporean know why she landed in this hot soup but for my overseas readers, please let explain briefly the background of her charges.

In June last year, she was angry that the taxi driver did not help her with loading her luggage onto the taxi and throwing her forward while making a sharp turn. She supposedly alighted, kicked the car door and then kicked the taxi driver in the groin. She subsequently lock herself in the taxi for 15 minutes to thrash the interiors of the taxi, causing damages to taxi meter and radio, among other things.

She had hired Mr. Subhas Anandan, a prominent criminal lawyer here to represent her after the incident, hoping that Mr. Subhas could get her off the hook due to his close relationship with court officers. The next court session, which marks the start of the actual trial, is set for 28 November. If convicted, she could be jailed or fined or both. However, I won't be surprised if she is let off lightly and become even more popular here. Sophisticated maneuver behind the scene often gets the culprit a ridiculous sentence that makes a mockery of justice here. And the unpredictability of court sentence is like the final result of soccer matches.

Now, in spite of her many controversies, like fighting with bowling alley assistance and the boss of a car repair shop and also driving without a license, her boss (MediaCorp) gave her more prime time shows to host and she became more popular in Singapore. She was previously sacked from her job but got easily rehired under a management revamp. The whole arrangement of her re-hiring was like changing her last name in paper but remain with the same family. This is how things sometimes get done in Singapore. You got to know the right people in the government. It happens everywhere in the world . Singapore is no exception. At the same time, I think Singaporean do not have her kind of rare talent. We need her kind to make this place a better place to live in.

The Government controlled main stream paper-"The Straits Times" blank out all news about her case. They are worried that her case would embarrass her boss -"MediaCorp", which is also government controlled. It's detractor call "Straits Times" a mouthpiece of our PAP government. Everybody knows that it's senior editors are, to put it euphemistically, on the same wavelength as our PAP government. Some say they're on the same telephone line. While others say that they were all hand-picked by the PAP government and trained for years to tow the party line. In fact, editors often receive calls from overzealous ministers who were anxious to ensure that a story comes out in a particular way or do not see the daylight at all. However, recently Wikileaks revealed that a large number of Singapore journalists were getting frustrated by press controls imposed by the PAP government. Only the fearless Yahoo Singapore reported her case. The latest news is Yahoo is sued by the owner of Straits Times for "copy right" infringement. In case you forget,  "We are a First World Country, with a First World PAP Government"


Below are some readers' comment on reading the same Yahoo News today. Nearly 600 had commented, almost all had harsh words for her. Hope she is sentenced in a way that show justice still prevails in Singapore, not otherwise.

If you wish to know what happens on 28th. Nov, the date of her trail in court, please read my posting of 29th. Nov. My prediction was quite accurate.

Posted by Diary of a Singaorean Cabby at 9:20 am