Decorative Lightings at Little India in celebration of Deepavali 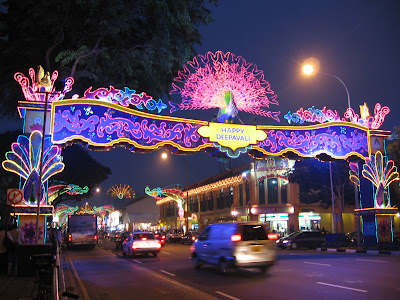 Yesterday was eve of Deepavali, also known as festival of lights. The Indian Hindu celebrates the triumph of light over darkness and good over evil.

For cabbies in Singapore, the first thought that came to mind was to avoid all the streets around "Little India" at all cost. That place, which is an area less than ten soccer field, would be like a beehive when a half-million foreign workers from the subcontinent turn up in festive mood to hang out on their day off. Although there were traffic warrants directing traffic flow, it was almost impossible to drive through the human congested streets. Moreover, these workers have scant regards for local traffic rules. They would crisscross the streets at their fancy and oblivious to all vehicles around as though these vehicles were transparent to them. Even on normal days, I tried to avoid "Little India". An MP once remarked that a driver had to switch on his/her headlight while driving through Little India although all street lights are not faulty. The place would be pitch dark with the large numbers of Indian around. He was reprimanded for his racist slur and left PAP.

Did I pick up passengers at Little India yesterday evening?. Yes, I did but it was after midnight when most of the crowd had dispersed. First, I got in Race Course Road and there were still quite a lot of Indian loitering along the street. Some were lying or sitting in the open field, while others were dancing and singing with cans of drinks in their hand. At a road side, two guys hailed me and when I stopped, a third guy got up from his slumber on the road, unsteadily and his friends wanted to help him into my cab. Before they could open my door, I speed off like a jet. I dread drunken. Down the street, many in shabby and suspicious disposition continued to hail me but I didn't stop for them because I fear troublesome customers. Finally, I pickup four smartly dress Indian male characters to Marina Bay Casino.

An hour later, at around 3am, I went back to Little India. By then the streets were almost deserted. I saw a  couple of drunken sleeping along the road side and open field. Surprisingly, the streets were clean with few litters but the open field were filled with garbage. Stall owners at the month-long Deepavali Bazaar were busy packing their wares. They had a few set-backs this festive season. First, their wares were damaged when the tent collapsed in a storm at the end of last month. Then they lost more goods when the area was flooded last Friday. Most stalls made about 30 percent lost.

Like the stall owners, my taking was bad for this festive night but I took it in my stride, hoping that with God's grace it will be still be a happy Deepavali for all my Hindu buddies.
Posted by Diary of a Singaorean Cabby at 10:20 pm