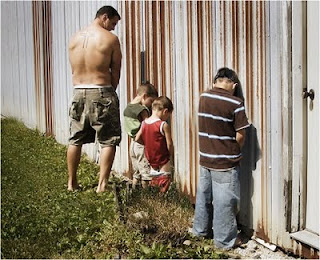 Should I be writing about peeing in this blog?. Well Yes! Its very relevant actually, let me explain.

In this job, when nature calls and you need to take a wee, a suitable place to do so can be quite hard to come by, especially in the broad daylight when everyone can see what you're doing. This problem isn't confine to people who drive for a living, all of us at some time will need to use a toilet when we are commuting. For me, the rule of the thump is to wee at anywhere convenient, so long as the place is hidden, dark and nobody can see what I'm doing. Also I do it only as a last resort when no suitable toilet is insight and I'm "bursting" to a point when it become dangerous to continue driving.

Last night, I found myself "bursting" while stuck in a traffic jam with two passengers heading to the Night Safari at Mandai Zoo. The pain was excruciating and unbearable and I had to press my stomach to ease my pain. I couldn't stop nor wee inside my taxi as I've passengers. At one time only and shame to say, I wee into a plastic bag inside my cab, when caught in a jam with no passenger and the call of nature cannot be ignored. In that situation, I threw graciousness through the window. It was the greatest relief and pleasure in my life after doing the "thing".

Now, as soon as I let off my passengers at the Night Safari, I headed straight to the dark bushes within the car park because there was no public toilet in this area. However, the whole area of lush foliage is a toilet in nature and a haven for cabbies to ease.  It was exhilarating as I emptied my bladder and I enjoyed a simple pleasure in life. Not surprisingly, a few other cabbies were also answering the call of nature in the bushes. Of course, the zoo ranger is aware that cabbies are using the bushes as a public convenience and conduct frequent patrols. So far, no reports of any arrest had been made. I think the park rangers understand the plights of cabbies as they are human too. 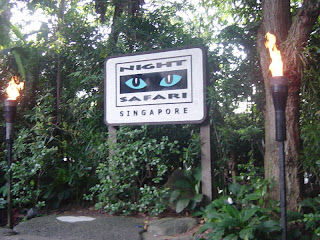 On the other hand, there are some cabbies who has no self respect and urinate anywhere they pleased. I promised that I must mention this incident in my blog when I've a chance. One night, while inside a multi-story carpark at Temple Street in Chinatown, I saw a middle aged man with a big tummy urinating beside his taxi. The car park was brightly lighted and some motorist were around. He was clearly visible. With a cigarette in his mouth and one hand holding his tiny prick, he was a repugnant sight and a disgrace to other cabby. I spit in disgust and drove off. 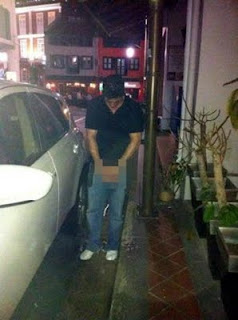 Recently, local actress, Miss Mindee Ong of movie 881 fame, received a rude shock when she saw a white man urinating on her car parked outside her shop. She stormed up to him, yelling at him to stop. Instead of stopping his act, the white man pointed his private part at her and invited her to watch his act. She took three pictures of the culprit and called the police. The incident was reported in the local press. She told the press that the act was disgusting, although she would not have pursued the matter if not for the man exposing his private part at her.
Posted by Diary of a Singaorean Cabby at 8:12 pm