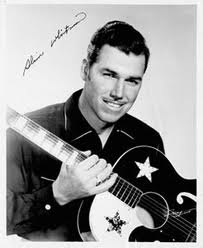 I can't resist adding Mr.Slim Whitman's songs of the sixties into my music label in this blog.

Slim Whitman, is an American country music singer and songwriter, known for his yodeling abilities. He has sold more than 120 million albums and has had numerous successful recordings.
His 1955 hit single "Rose Marie" held the Guninnes World Record for the longest time at number 1 on the UK charts until Bryan Adams broke the record in 1991 after 36 years. In the U.S., his "Indian Love Call" (1952) and "Secret Love" (1953) reached number 2 on the Billbord country chart. The 87 years old Mr. Slim Whitman lives today in Florida, USA.
Pop singer Micheal Jackson cited Whitman as one of his ten favorite vocalists. Beatle George Harrison cited Whitman as an early influence: "The first person I ever saw playing a guitar was Slim Whitman, either a photo of him in a magazine or live on television. Another Beatle Paul McCartney credited a poster of Whitman with giving him the idea of playing his guitar left-handed with his guitar strung the opposite way to a right-handed player's. To me Slim Whitman brings fond memories of my youth and I adore him for his "China Doll".
Please allow me to share with you my favorites of the one and only, Mr. Sim Whitman.
Rose Marie

Posted by Diary of a Singaorean Cabby at 8:37 pm

Here in Australia, we can’t access the same apps that you can in the U.S. Seems iTunes is hellbent on keeping us from giving them money.

Wondering if any of you generous Cup of Jo readers would mind copying and pasting the tracklist for “Rich Girl Pop” playlist from Songza, so that I can at least source some of the songs individually?
đại lý cá độ trên mạng
dai ly ca cuoc bong da truc tuyen
dai ly ca do bong da tren mang