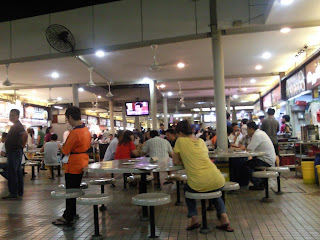 It was 3.00am in the wee hour of the night and this hawker center was still packed with lots of hungry looking people, both young and old. I'm talking about the hawker center at Lavendar Food Square at 380 Jalan Besar. Surprisingly. most of the people in the crowd were congregated at a wanton noodle stall, forming a long queue of at least 15 people, all patiently waiting for their turn. It must be the most popular stall there. 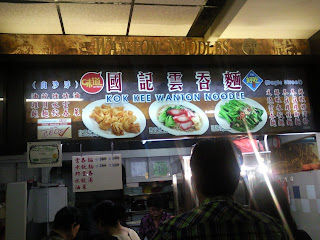 I joined the queue though my stomach was groaning for food after my last meal 8 hours ago. I've heard stories raving about how delicious the wanton noodle was at this stall and was therefore, anxious to find out for myself. The stall was simply called "Kok Kee Wanton Noodle".
A Plate of Wanton Noodle 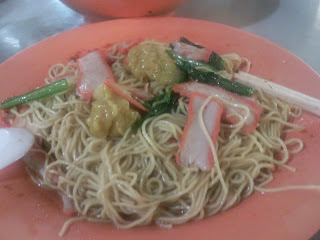 My order was a standard single plate of wanton noodle costing $4, without any extra such as fried wonton in pieces or wonton soup in a bowl. The portion of noodles was small with only two pieces of cooked wanton, four slides of barbecued pork and some "kailang" vegetable. I thought it was expensive and was hoping that the taste would compensate for it's high price. But I was wrong. The sauce was slightly on the sweet side with no trace of barbecued pork taste. It was nothing spectacular. It didn't come close to what I had in my youth many years ago. Nonetheless, the long queue at this store got longer when I left and those people could be right and I'm wrong. It's worth a try to find out for yourself if you're within the vicinity at the wee hour of the night.
Posted by Diary of a Singaorean Cabby at 9:11 pm

I love their unique sweet sauce, I even slurp it up. I also like their noodles.

But not the price and the quantity.

So I have to restrain myself.

Wonton mee got different style meh?
Sorry, I did'nt know. Time flies. It's more than 15 months and I've not visited that stall yet. Maybe I should do it soon.

I LOVE that ice cream cake idea! We’re having friends over tomorrow and I’ve added that to my list!
One of my favorite desserts to serve is so simple and so humble: fruit salad, but not your usual suspect. I like to use whatever is in season but you can’t go wrong with a mix of sliced strawberries, blueberries, halved green grapes, pomegranate seeds, and raspberries. Right before serving, add a teeny drizzle of honey and chopped fresh mint (the secret ingredient!).
dai ly ca cuoc bong da truc tuyen
dai ly ca do bong da tren mang
đại lý cá độ bóng đá trên mạng