An hour into the evening peak hour at 6pm, a Caucasian lady boarded my taxi at Bishan MRT taxi stand and told me to send her to Sheldford Road off Durnean Road.
She looked like in a late stage of  pregnancy from the size her tummy and the way she steadied herself onto the back seat.
I reminded myself that I had to drive smoothly during the journey and avoid any sudden breaks or speeding over humps, so that she would not suffer undue stress.
A scolding two years back from a pregnant passenger for giving her a rough ride was still vivid in my memory and I do not want to repeat the mistakes again.
Moreover, the life of an unborn child and a prospective mother were in my hand then.

After she had settled herself comfortably in my cab, I asked her which way she would like me to take.
It was a standard question that we normally ask our passenger before driving off and also a form of customer service as preached by our company. For me, it's the rule of the thump in my line of work to always take the route the customer prefers, if he or she has one. Often, if we do not ask politely,  we would received blunt rebuttal,  like
1. "You are the taxi driver, you don't know which way to take, meh?".
2. "You should know the best way, why ask me!".
3. "If you don't know the way, how come you are driving a taxi".
4. "Don't ask me stupid questions!"

After some years of receiving such obnoxious rebuttals, I rephrase my question more politely,  like:

Unfortunately, I forgot my polite question that evening and the journey started off on a sour mood with a rude rebuttal from the lady. However, the worst was yet to come at the end of the trip.

The journey was smooth along Lionel Road till Adam Road.
To get to her final destination at Sheldford Road, I had to go under Adam Road's flyover to join Bukit Timah Road and then made an "U-Turn" about 500 meters down the road into Duanean Road.
As soon as we went beneath the Adam flyover, we got caught in a massive traffic jam and it stretched as far as our eyes could see along Bukit Timah Road.
Traffic was hardly moving and I was at the furthest right lane of a three lanes road.
Sensing that the fare meter was ticking away furiously while we were only inching ahead, the lady suddenly announced that she wanted to disembark at Coronation Plaza, which was about 200 meters on the left lane.
Taken aback and feeling indignant by her sudden request to change her destination, I told her in a louder than usual voice that it was difficult, dangerous and almost impossible to change lane in that jam situation.
She went into a rage upon hearing my reply and started to display her customer's superiority by insisting that I follow her instruction.
"I won't take your "SHIT". You local taxi drivers are all the same. I'll make a complaint on you",. She said in a furious and venomous tone.
"Go ahead, make your complaint. I'll print a receipt for you so that you have all my detail for your complaint"
I challenged her in defiance.
She was still fuming and altering all sorts of nasty things that were best ignored, when I shouted.
"Shut up, I don't want to talk to you again."
Silence then engulfed my cab.
After much difficulty filtering through the traffic jam, I finally dropped her at Coronation Plaza and gave her a receipt as promised. All the while, I did not make eye contact with her. Till today, I've no idea how she looks like. I reckon she must have resembled "Mrs. Pauline Hanson" of Australia, the racist Asian hater.

A few days later, a PRO. from Comfort called and asked me whether I've an argument with a lady on that day. I explained the whole situation to him and he seemed satisfied. 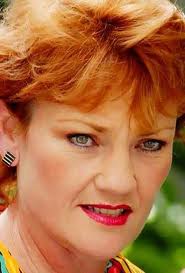 I've no wish to pass a moral judgement on this episode and certainly do not wish for a repeat.
Posted by Diary of a Singaorean Cabby at 10:04 am